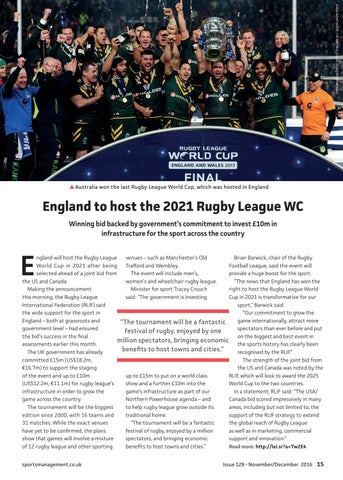 Australia won the last Rugby League World Cup, which was hosted in England

ngland will host the Rugby League venues – such as Manchester’s Old Brian Barwick, chair of the Rugby World Cup in 2021 after being Trafford and Wembley. Football League, said the event will selected ahead of a joint bid from The event will include men’s, provide a huge boost for the sport. the US and Canada. women’s and wheelchair rugby league. “The news that England has won the Making the announcement Minister for sport Tracey Crouch right to host the Rugby League World this morning, the Rugby League said: “The government is investing Cup in 2021 is transformative for our International Federation (RLIF) said sport,” Barwick said. the wide support for the sport in “Our commitment to grow the England – both at grassroots and game internationally, attract more “The tournament will be a fantastic government level – had ensured spectators than ever before and put festival of rugby, enjoyed by one the bid’s success in the final on the biggest and best event in million spectators, bringing economic assessments earlier this month. the sports history has clearly been benefits to host towns and cities.” The UK government has already recognised by the RLIF.” committed £15m (US$18.2m, The strength of the joint bid from €16.7m) to support the staging the US and Canada was noted by the of the event and up to £10m up to £15m to put on a world class RLIF, which will look to award the 2025 (US$12.2m, €11.1m) for rugby league’s show and a further £10m into the World Cup to the two countries. infrastructure in order to grow the game’s infrastructure as part of our In a statement, RLIF said: “The USA/ game across the country. Northern Powerhouse agenda – and Canada bid scored impressively in many The tournament will be the biggest to help rugby league grow outside its areas, including but not limited to, the edition since 2000, with 16 teams and traditional home. support of the RLIF strategy to extend 31 matches. While the exact venues “The tournament will be a fantastic the global reach of Rugby League have yet to be confirmed, the plans festival of rugby, enjoyed by a million as well as in marketing, commercial show that games will involve a mixture spectators, and bringing economic support and innovation.” of 12 rugby league and other sporting benefits to host towns and cities.” Read more: http://lei.sr?a=7w2E4 sportsmanagement.co.uk