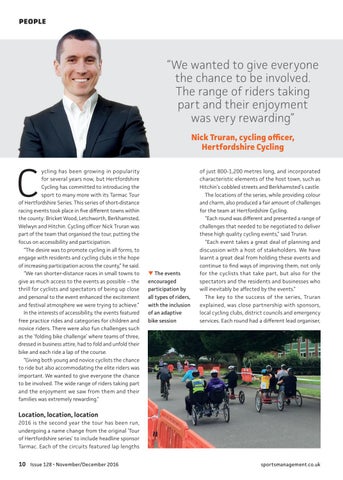 “We wanted to give everyone the chance to be involved. The range of riders taking part and their enjoyment was very rewarding” Nick Truran, cycling officer, Hertfordshire Cycling

ycling has been growing in popularity for several years now, but Hertfordshire Cycling has committed to introducing the sport to many more with its Tarmac Tour of Hertfordshire Series. This series of short-distance racing events took place in five different towns within the county: Bricket Wood, Letchworth, Berkhamsted, Welwyn and Hitchin. Cycling officer Nick Truran was part of the team that organised the tour, putting the focus on accessibility and participation. “The desire was to promote cycling in all forms, to engage with residents and cycling clubs in the hope of increasing participation across the county,” he said. “We ran shorter-distance races in small towns to give as much access to the events as possible – the thrill for cyclists and spectators of being up close and personal to the event enhanced the excitement and festival atmosphere we were trying to achieve.” In the interests of accessibility, the events featured free practice rides and categories for children and novice riders. There were also fun challenges such as the ‘folding bike challenge’ where teams of three, dressed in business attire, had to fold and unfold their bike and each ride a lap of the course. “Giving both young and novice cyclists the chance to ride but also accommodating the elite riders was important. We wanted to give everyone the chance to be involved. The wide range of riders taking part and the enjoyment we saw from them and their families was extremely rewarding.”

 The events encouraged participation by all types of riders, with the inclusion of an adaptive bike session

of just 800-1,200 metres long, and incorporated characteristic elements of the host town, such as Hitchin’s cobbled streets and Berkhamsted’s castle. The locations of the series, while providing colour and charm, also produced a fair amount of challenges for the team at Hertfordshire Cycling. “Each round was different and presented a range of challenges that needed to be negotiated to deliver these high quality cycling events,” said Truran. “Each event takes a great deal of planning and discussion with a host of stakeholders. We have learnt a great deal from holding these events and continue to find ways of improving them, not only for the cyclists that take part, but also for the spectators and the residents and businesses who will inevitably be affected by the events.” The key to the success of the series, Truran explained, was close partnership with sponsors, local cycling clubs, district councils and emergency services. Each round had a different lead organiser,

Location, location, location 2016 is the second year the tour has been run, undergoing a name change from the original ‘Tour of Hertfordshire series’ to include headline sponsor Tarmac. Each of the circuits featured lap lengths