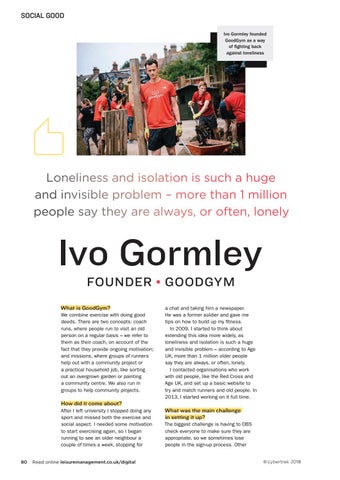 Loneliness and isolation is such a huge and invisible problem – more than 1 million people say they are always, or often, lonely

What is GoodGym? We combine exercise with doing good deeds. There are two concepts: coach runs, where people run to visit an old person on a regular basis – we refer to them as their coach, on account of the fact that they provide ongoing motivation; and missions, where groups of runners help out with a community project or a practical household job, like sorting out an overgrown garden or painting a community centre. We also run in groups to help community projects.

a chat and taking him a newspaper. He was a former soldier and gave me tips on how to build up my fitness. In 2009, I started to think about extending this idea more widely, as loneliness and isolation is such a huge and invisible problem – according to Age UK, more than 1 million older people say they are always, or often, lonely. I contacted organisations who work with old people, like the Red Cross and Age UK, and set up a basic website to try and match runners and old people. In 2013, I started working on it full time.

How did it come about? After I left university I stopped doing any sport and missed both the exercise and social aspect. I needed some motivation to start exercising again, so I began running to see an older neighbour a couple of times a week, stopping for 80

What was the main challenge in setting it up? The biggest challenge is having to DBS check everyone to make sure they are appropriate, so we sometimes lose people in the sign-up process. Other © cybertrek 2018