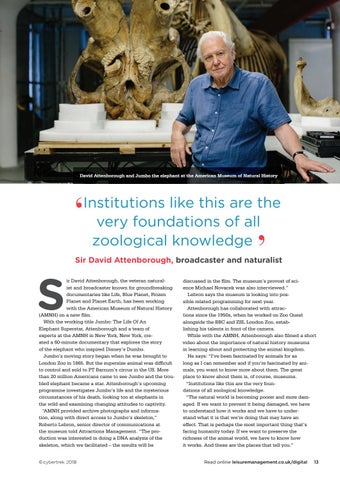 Institutions like this are the very foundations of all zoological knowledge

ir David Attenborough, the veteran naturalist and broadcaster known for groundbreaking documentaries like Life, Blue Planet, Frozen Planet and Planet Earth, has been working with the American Museum of Natural History (AMNH) on a new film. With the working title Jumbo: The Life Of An Elephant Superstar, Attenborough and a team of experts at the AMNH in New York, New York, created a 60-minute documentary that explores the story of the elephant who inspired Disney’s Dumbo. Jumbo’s moving story began when he was brought to London Zoo in 1865. But the supersize animal was difficult to control and sold to PT Barnum’s circus in the US. More than 20 million Americans came to see Jumbo and the troubled elephant became a star. Attenborough’s upcoming programme investigates Jumbo’s life and the mysterious circumstances of his death, looking too at elephants in the wild and examining changing attitudes to captivity. “AMNH provided archive photographs and information, along with direct access to Jumbo’s skeleton,” Roberto Lebron, senior director of communications at the museum told Attractions Management. “The production was interested in doing a DNA analysis of the skeleton, which we facilitated – the results will be

discussed in the film. The museum’s provost of science Michael Novacek was also interviewed.” Lebron says the museum is looking into possible related programming for next year. Attenborough has collaborated with attractions since the 1950s, when he worked on Zoo Quest alongside the BBC and ZSL London Zoo, establishing his talents in front of the camera. While with the AMNH, Attenborough also filmed a short video about the importance of natural history museums in learning about and protecting the animal kingdom. He says: “I’ve been fascinated by animals for as long as I can remember and if you’re fascinated by animals, you want to know more about them. The great place to know about them is, of course, museums. “Institutions like this are the very foundations of all zoological knowledge. “The natural world is becoming poorer and more damaged. If we want to prevent it being damaged, we have to understand how it works and we have to understand what it is that we’re doing that may have an effect. That is perhaps the most important thing that’s facing humanity today. If we want to preserve the richness of the animal world, we have to know how it works. And these are the places that tell you.” Read online leisuremanagement.co.uk/digital