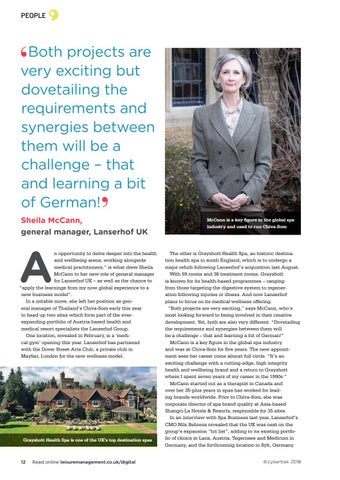 Both projects are very exciting but dovetailing the requirements and synergies between them will be a challenge – that and learning a bit of German! Sheila McCann, general manager, Lanserhof UK

n opportunity to delve deeper into the health and wellbeing arena, working alongside medical practitioners,” is what drew Sheila McCann to her new role of general manager for Lanserhof UK – as well as the chance to “apply the learnings from my now global experience to a new business model”. In a notable move, she left her position as general manager of Thailand’s Chiva-Som early this year to head up two sites which form part of the everexpanding portfolio of Austria-based health and medical resort specialists the Lanserhof Group. One location, revealed in February, is a ‘medical gym’ opening this year. Lanserhof has partnered with the Dover Street Arts Club, a private club in Mayfair, London for the new wellness model.

The other is Grayshott Health Spa, an historic destination health spa in south England, which is to undergo a major refurb following Lanserhof’s acquisition last August. With 59 rooms and 36 treatment rooms, Grayshott is known for its health-based programmes – ranging from those targeting the digestive system to regeneration following injuries or illness. And now Lanserhof plans to focus on its medical wellness offering. “Both projects are very exciting,” says McCann, who’s most looking forward to being involved in their creative development. Yet, both are also very different. “Dovetailing the requirements and synergies between them will be a challenge – that and learning a bit of German!” McCann is a key figure in the global spa industry and was at Chiva-Som for five years. The new appointment sees her career come almost full circle. “It’s an exciting challenge with a cutting-edge, high integrity health and wellbeing brand and a return to Grayshott where I spent seven years of my career in the 1990s.” McCann started out as a therapist in Canada and over her 35-plus years in spas has worked for leading brands worldwide. Prior to Chiva-Som, she was corporate director of spa brand quality at Asia-based Shangri-La Hotels & Resorts, responsible for 35 sites. In an interview with Spa Business last year, Lanserhof’s CMO Nils Behrens revealed that the UK was next on the group’s expansion “hit list”, adding to its existing portfolio of clinics in Lans, Austria; Tegernsee and Medicum in Germany, and the forthcoming location in Sylt, Germany. © cybertrek 2018