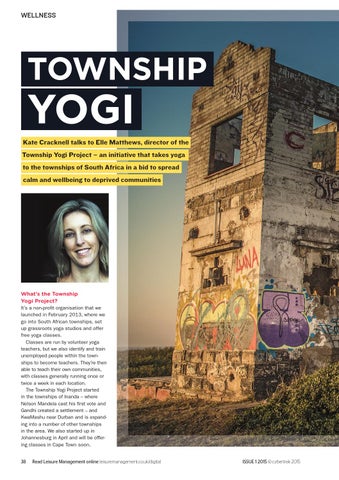 Kate Cracknell talks to Elle Matthews, director of the Township Yogi Project – an initiative that takes yoga to the townships of South Africa in a bid to spread calm and wellbeing to deprived communities

What’s the Township Yogi Project? It’s a non-profit organisation that we launched in February 2013, where we go into South African townships, set up grassroots yoga studios and offer free yoga classes. Classes are run by volunteer yoga teachers, but we also identify and train unemployed people within the townships to become teachers. They’re then able to teach their own communities, with classes generally running once or twice a week in each location. The Township Yogi Project started in the townships of Inanda – where Nelson Mandela cast his first vote and Gandhi created a settlement – and KwaMashu near Durban and is expanding into a number of other townships in the area. We also started up in Johannesburg in April and will be offering classes in Cape Town soon. 38