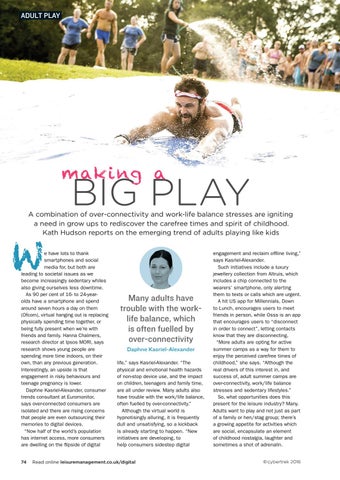 A combination of over-connectivity and work-life balance stresses are igniting a need in grow ups to rediscover the carefree times and spirit of childhood. Kath Hudson reports on the emerging trend of adults playing like kids e have lots to thank smartphones and social media for, but both are leading to societal issues as we become increasingly sedentary whiles also giving ourselves less downtime. As 90 per cent of 16- to 24-yearolds have a smartphone and spend around seven hours a day on them (Ofcom), virtual hanging out is replacing physically spending time together, or being fully present when we’re with friends and family. Hanna Chalmers, research director at Ipsos MORI, says research shows young people are spending more time indoors, on their own, than any previous generation. Interestingly, an upside is that engagement in risky behaviours and teenage pregnancy is lower. Daphne Kasriel-Alexander, consumer trends consultant at Euromonitor, says over-connected consumers are isolated and there are rising concerns that people are even outsourcing their memories to digital devices. “Now half of the world’s population has internet access, more consumers are dwelling on the flipside of digital 74

Many adults have trouble with the worklife balance, which is often fuelled by over-connectivity Daphne Kasriel-Alexander life,” says Kasriel-Alexander. “The physical and emotional health hazards of non-stop device use, and the impact on children, teenagers and family time, are all under review. Many adults also have trouble with the work/life balance, often fuelled by over-connectivity.” Although the virtual world is hypnotisingly alluring, it is frequently dull and unsatisfying, so a kickback is already starting to happen. “New initiatives are developing, to help consumers sidestep digital

engagement and reclaim offline living,” says Kasriel-Alexander. Such initiatives include a luxury jewellery collection from Altruis, which includes a chip connected to the wearers’ smartphone, only alerting them to texts or calls which are urgent. A hit US app for Millennials, Down to Lunch, encourages users to meet friends in person, while Osss is an app that encourages users to “disconnect in order to connect”, letting contacts know that they are disconnecting. “More adults are opting for active summer camps as a way for them to enjoy the perceived carefree times of childhood,” she says. “Although the real drivers of this interest in, and success of, adult summer camps are over-connectivity, work/life balance stresses and sedentary lifestyles.” So, what opportunities does this present for the leisure industry? Many. Adults want to play and not just as part of a family or hen/stag group; there’s a growing appetite for activities which are social, encapsulate an element of childhood nostalgia, laughter and sometimes a shot of adrenalin. © cybertrek 2016