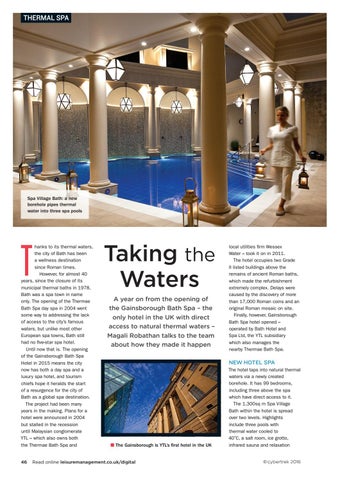 hanks to its thermal waters, the city of Bath has been a wellness destination since Roman times. However, for almost 40 years, since the closure of its municipal thermal baths in 1978, Bath was a spa town in name only. The opening of the Thermae Bath Spa day spa in 2004 went some way to addressing the lack of access to the city’s famous waters, but unlike most other European spa towns, Bath still had no five-star spa hotel. Until now that is. The opening of the Gainsborough Bath Spa Hotel in 2015 means the city now has both a day spa and a luxury spa hotel, and tourism chiefs hope it heralds the start of a resurgence for the city of Bath as a global spa destination. The project had been many years in the making. Plans for a hotel were announced in 2004 but stalled in the recession until Malaysian conglomerate YTL – which also owns both the Thermae Bath Spa and 46

local utilities firm Wessex Water – took it on in 2011. The hotel occupies two Grade II listed buildings above the remains of ancient Roman baths, which made the refurbishment extremely complex. Delays were caused by the discovery of more than 17,000 Roman coins and an original Roman mosaic on site. Finally, however, Gainsborough Bath Spa hotel opened – operated by Bath Hotel and Spa Ltd, the YTL subsidiary which also manages the nearby Thermae Bath Spa.

■ The Gainsborough is YTL’s first hotel in the UK

The hotel taps into natural thermal waters via a newly created borehole. It has 99 bedrooms, including three above the spa which have direct access to it. The 1,300sq m Spa Village Bath within the hotel is spread over two levels. Highlights include three pools with thermal water cooled to 40˚C, a salt room, ice grotto, infrared sauna and relaxation ©cybertrek 2016