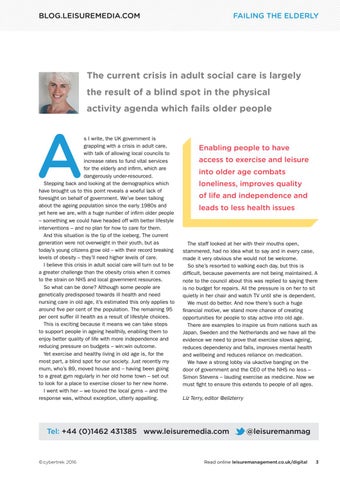 s I write, the UK government is grappling with a crisis in adult care, with talk of allowing local councils to increase rates to fund vital services for the elderly and infirm, which are dangerously under-resourced. Stepping back and looking at the demographics which have brought us to this point reveals a woeful lack of foresight on behalf of government. We’ve been talking about the ageing population since the early 1980s and yet here we are, with a huge number of infirm older people – something we could have headed off with better lifestyle interventions – and no plan for how to care for them. And this situation is the tip of the iceberg. The current generation were not overweight in their youth, but as today’s young citizens grow old – with their record breaking levels of obesity – they’ll need higher levels of care. I believe this crisis in adult social care will turn out to be a greater challenge than the obesity crisis when it comes to the strain on NHS and local government resources. So what can be done? Although some people are genetically predisposed towards ill health and need nursing care in old age, it’s estimated this only applies to around five per cent of the population. The remaining 95 per cent suffer ill health as a result of lifestyle choices. This is exciting because it means we can take steps to support people in ageing healthily, enabling them to enjoy better quality of life with more independence and reducing pressure on budgets – win:win outcome. Yet exercise and healthy living in old age is, for the most part, a blind spot for our society. Just recently my mum, who’s 89, moved house and – having been going to a great gym regularly in her old home town – set out to look for a place to exercise closer to her new home. I went with her – we toured the local gyms – and the response was, without exception, utterly appalling.

Enabling people to have access to exercise and leisure into older age combats loneliness, improves quality of life and independence and leads to less health issues

The staff looked at her with their mouths open, stammered, had no idea what to say and in every case, made it very obvious she would not be welcome. So she’s resorted to walking each day, but this is difficult, because pavements are not being maintained. A note to the council about this was replied to saying there is no budget for repairs. All the pressure is on her to sit quietly in her chair and watch TV until she is dependent. We must do better. And now there’s such a huge financial motive, we stand more chance of creating opportunities for people to stay active into old age. There are examples to inspire us from nations such as Japan, Sweden and the Netherlands and we have all the evidence we need to prove that exercise slows ageing, reduces dependency and falls, improves mental health and wellbeing and reduces reliance on medication. We have a strong lobby via ukactive banging on the door of government and the CEO of the NHS no less – Simon Stevens – lauding exercise as medicine. Now we must fight to ensure this extends to people of all ages.