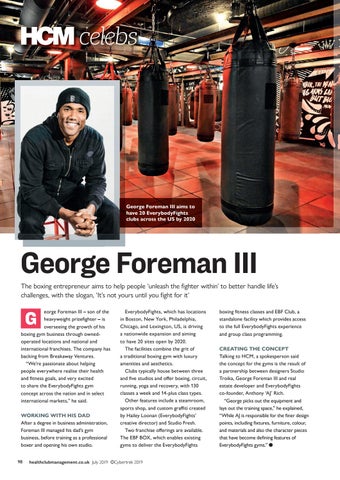 The boxing entrepreneur aims to help people ‘unleash the fighter within’ to better handle life’s challenges, with the slogan, ‘It’s not yours until you fight for it’

eorge Foreman III – son of the heavyweight prizefighter – is overseeing the growth of his boxing gym business through ownedoperated locations and national and international franchises. The company has backing from Breakaway Ventures. “We’re passionate about helping people everywhere realise their health and fitness goals, and very excited to share the EverybodyFights gym concept across the nation and in select international markets,” he said. WORKING WITH HIS DAD After a degree in business administration, Foreman III managed his dad’s gym business, before training as a professional boxer and opening his own studio. 98

EverybodyFights, which has locations in Boston, New York, Philadelphia, Chicago, and Lexington, US, is driving a nationwide expansion and aiming to have 20 sites open by 2020. The facilities combine the grit of a traditional boxing gym with luxury amenities and aesthetics. Clubs typically house between three and five studios and oﬀer boxing, circuit, running, yoga and recovery, with 130 classes a week and 14-plus class types. Other features include a steamroom, sports shop, and custom graﬃti created by Hailey Loonan (EverybodyFights’ creative director) and Studio Fresh. Two franchise oﬀerings are available. The EBF BOX, which enables existing gyms to deliver the EverybodyFights

boxing fitness classes and EBF Club, a standalone facility which provides access to the full EverybodyFights experience and group class programming. CREATING THE CONCEPT Talking to HCM, a spokesperson said the concept for the gyms is the result of a partnership between designers Studio Troika, George Foreman III and real estate developer and EverybodyFights co-founder, Anthony ‘AJ’ Rich. “George picks out the equipment and lays out the training space,” he explained, “While AJ is responsible for the finer design points, including fixtures, furniture, colour, and materials and also the character pieces that have become defining features of EverybodyFights gyms.” ●