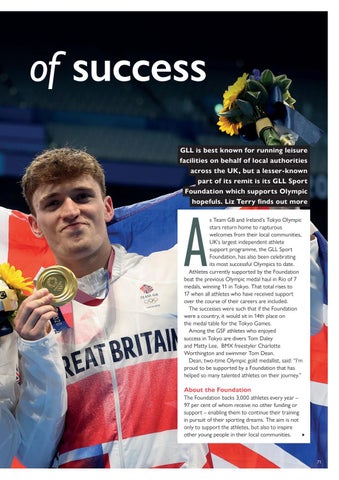 of success GLL is best known for running leisure facilities on behalf of local authorities across the UK, but a lesser-known part of its remit is its GLL Sport Foundation which supports Olympic hopefuls. Liz Terry finds out more

s Team GB and Ireland’s Tokyo Olympic stars return home to rapturous welcomes from their local communities, UK’s largest independent athlete support programme, the GLL Sport Foundation, has also been celebrating its most successful Olympics to date. Athletes currently supported by the Foundation beat the previous Olympic medal haul in Rio of 7 medals, winning 11 in Tokyo. That total rises to 17 when all athletes who have received support over the course of their careers are included. The successes were such that if the Foundation were a country, it would sit in 14th place on the medal table for the Tokyo Games. Among the GSF athletes who enjoyed success in Tokyo are divers Tom Daley and Matty Lee, BMX freestyler Charlotte Worthington and swimmer Tom Dean. Dean, two-time Olympic gold medallist, said: “I’m proud to be supported by a Foundation that has helped so many talented athletes on their journey.”

About the Foundation The Foundation backs 3,000 athletes every year – 97 per cent of whom receive no other funding or support – enabling them to continue their training in pursuit of their sporting dreams. The aim is not only to support the athletes, but also to inspire other young people in their local communities.