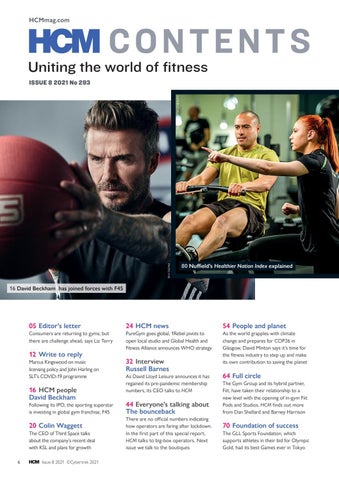 Consumers are returning to gyms, but there are challenge ahead, says Liz Terry

As the world grapples with climate change and prepares for COP26 in Glasgow, David Minton says it’s time for the fitness industry to step up and make its own contribution to saving the planet

32 Interview Russell Barnes As David Lloyd Leisure announces it has regained its pre-pandemic membership numbers, its CEO talks to HCM

44 Everyone’s talking about The bounceback There are no official numbers indicating how operators are faring after lockdown. In the first part of this special report, HCM talks to big-box operators. Next issue we talk to the boutiques

64 Full circle The Gym Group and its hybrid partner, Fiit, have taken their relationship to a new level with the opening of in-gym Fiit Pods and Studios. HCM finds out more from Dan Shellard and Barney Harrison

70 Foundation of success The GLL Sports Foundation, which supports athletes in their bid for Olympic Gold, had its best Games ever in Tokyo