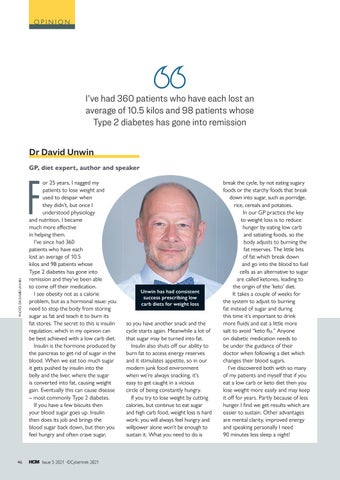 I’ve had 360 patients who have each lost an average of 10.5 kilos and 98 patients whose Type 2 diabetes has gone into remission Dr David Unwin GP, diet expert, author and speaker

or 25 years, I nagged my patients to lose weight and used to despair when they didn’t, but once I understood physiology and nutrition, I became much more eﬀective in helping them. I’ve since had 360 patients who have each lost an average of 10.5 kilos and 98 patients whose Type 2 diabetes has gone into remission and they’ve been able to come off their medication. I see obesity not as a calorie problem, but as a hormonal issue: you need to stop the body from storing sugar as fat and teach it to burn its fat stores. The secret to this is insulin regulation, which in my opinion can be best achieved with a low carb diet. Insulin is the hormone produced by the pancreas to get rid of sugar in the blood. When we eat too much sugar it gets pushed by insulin into the belly and the liver, where the sugar is converted into fat, causing weight gain. Eventually this can cause disease – most commonly Type 2 diabetes. If you have a few biscuits then your blood sugar goes up. Insulin then does its job and brings the blood sugar back down, but then you feel hungry and often crave sugar,

so you have another snack and the cycle starts again. Meanwhile a lot of that sugar may be turned into fat. Insulin also shuts off our ability to burn fat to access energy reserves and it stimulates appetite, so in our modern junk food environment when we’re always snacking, it’s easy to get caught in a vicious circle of being constantly hungry. If you try to lose weight by cutting calories, but continue to eat sugar and high carb food, weight loss is hard work: you will always feel hungry and willpower alone won’t be enough to sustain it. What you need to do is

break the cycle, by not eating sugary foods or the starchy foods that break down into sugar, such as porridge, rice, cereals and potatoes. In our GP practice the key to weight loss is to reduce hunger by eating low carb and satiating foods, so the body adjusts to burning the fat reserves. The little bits of fat which break down and go into the blood to fuel cells as an alternative to sugar are called ketones, leading to the origin of the ‘keto’ diet. It takes a couple of weeks for the system to adjust to burning fat instead of sugar and during this time it’s important to drink more fluids and eat a little more salt to avoid “keto flu.” Anyone on diabetic medication needs to be under the guidance of their doctor when following a diet which changes their blood sugars. I’ve discovered both with so many of my patients and myself that if you eat a low carb or keto diet then you lose weight more easily and may keep it off for years. Partly because of less hunger I find we get results which are easier to sustain. Other advantages are mental clarity, improved energy and speaking personally I need 90 minutes less sleep a night!