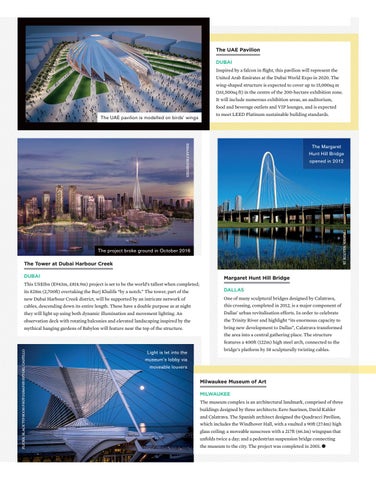 The UAE Pavilion DUBAI Inspired by a falcon in flight, this pavilion will represent the United Arab Emirates at the Dubai World Expo in 2020. The wing-shaped structure is expected to cover up to 15,000sq m (161,500sq ft) in the centre of the 200-hectare exhibition zone. It will include numerous exhibition areas, an auditorium, food and beverage outlets and VIP lounges, and is expected The UAE pavilion is modelled on birds’ wings

The project broke ground in October 2016

new Dubai Harbour Creek district, will be supported by an intricate network of

One of many sculptural bridges designed by Calatrava,

cables, descending down its entire length. These have a double purpose as at night

this crossing, completed in 2012, is a major component of

they will light up using both dynamic illumination and movement lighting. An

observation deck with rotating balconies and elevated landscaping inspired by the

the Trinity River and highlight “its enormous capacity to

mythical hanging gardens of Babylon will feature near the top of the structure.

bring new development to Dallas”, Calatrava transformed the area into a central gathering place. The structure

features a 400ft (122m) high steel arch, connected to the Light is let into the

Milwaukee Museum of Art MILWAUKEE The museum complex is an architectural landmark, comprised of three buildings designed by three architects: Eero Saarinen, David Kahler and Calatrava. The Spanish architect designed the Quadracci Pavilion, which includes the Windhover Hall, with a vaulted a 90ft (27.4m) high glass ceiling; a moveable sunscreen with a 217ft (66.1m) wingspan that unfolds twice a day; and a pedestrian suspension bridge connecting the museum to the city. The project was completed in 2001. ●