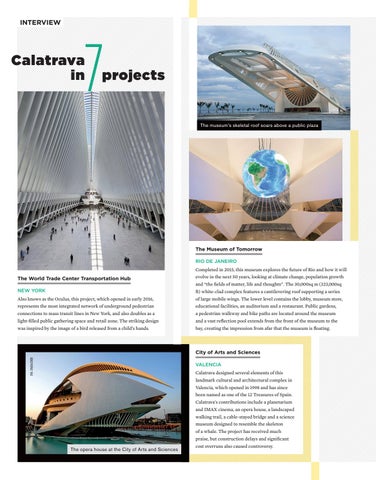 The museum’s skeletal roof soars above a public plaza

The Museum of Tomorrow RIO DE JANEIRO Completed in 2015, this museum explores the future of Rio and how it will

evolve in the next 50 years, looking at climate change, population growth

Also knows as the Oculus, this project, which opened in early 2016,

represents the most integrated network of underground pedestrian

educational facilities, an auditorium and a restaurant. Public gardens,

connections to mass transit lines in New York, and also doubles as a

a pedestrian walkway and bike paths are located around the museum

was inspired by the image of a bird released from a child’s hands.

bay, creating the impression from afar that the museum is floating.

City of Arts and Sciences VALENCIA Calatrava designed several elements of this landmark cultural and architectural complex in Valencia, which opened in 1998 and has since been named as one of the 12 Treasures of Spain. Calatrava’s contributions include a planetarium and IMAX cinema, an opera house, a landscaped walking trail, a cable-stayed bridge and a science museum designed to resemble the skeleton of a whale. The project has received much praise, but construction delays and significant The opera house at the City of Arts and Sciences