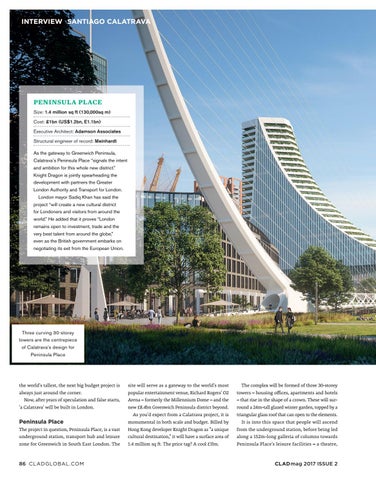 PENINSULA PLACE Size: 1.4 million sq ft (130,000sq m) Cost: £1bn (US$1.2bn, E1.1bn) Executive Architect: Adamson Associates Structural engineer of record: Meinhardt As the gateway to Greenwich Peninsula, Calatrava’s Peninsula Place “signals the intent and ambition for this whole new district.” Knight Dragon is jointly spearheading the development with partners the Greater London Authority and Transport for London. London mayor Sadiq Khan has said the project “will create a new cultural district for Londoners and visitors from around the world.” He added that it proves “London remains open to investment, trade and the very best talent from around the globe,” even as the British government embarks on negotiating its exit from the European Union.

the world’s tallest, the next big budget project is always just around the corner. Now, after years of speculation and false starts, ‘a Calatrava’ will be built in London.

Peninsula Place The project in question, Peninsula Place, is a vast underground station, transport hub and leisure zone for Greenwich in South East London. The

site will serve as a gateway to the world’s most popular entertainment venue, Richard Rogers’ O2 Arena – formerly the Millennium Dome – and the new £8.4bn Greenwich Peninsula district beyond. As you’d expect from a Calatrava project, it is monumental in both scale and budget. Billed by Hong Kong developer Knight Dragon as “a unique cultural destination,” it will have a surface area of 1.4 million sq ft. The price tag? A cool £1bn.

The complex will be formed of three 30-storey towers – housing offices, apartments and hotels – that rise in the shape of a crown. These will surround a 24m-tall glazed winter garden, topped by a triangular glass roof that can open to the elements. It is into this space that people will ascend from the underground station, before being led along a 152m-long galleria of columns towards Peninsula Place’s leisure facilities – a theatre,