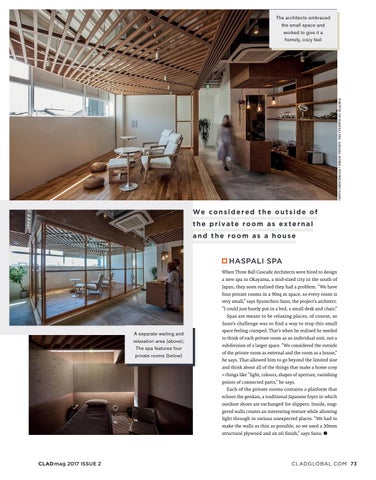 The architects embraced the small space and worked to give it a homely, cozy feel

A separate waiting and relaxation area (above); The spa features four private rooms (below)

When Three Ball Cascade Architects were hired to design a new spa in Okayama, a mid-sized city in the south of Japan, they soon realised they had a problem. “We have four private rooms in a 90sq m space, so every room is very small,” says Syunichiro Sano, the project’s architect. “I could just barely put in a bed, a small desk and chair.” Spas are meant to be relaxing places, of course, so Sano’s challenge was to find a way to stop this small space feeling cramped. That’s when he realised he needed to think of each private room as an individual unit, not a subdivision of a larger space. “We considered the outside of the private room as external and the room as a house,” he says. That allowed him to go beyond the limited size and think about all of the things that make a home cosy – things like “light, colours, shapes of aperture, vanishing points of connected parts,” he says. Each of the private rooms contains a platform that echoes the genkan, a traditional Japanese foyer in which outdoor shoes are exchanged for slippers. Inside, staggered walls creates an interesting texture while allowing light through in various unexpected places. “We had to make the walls as thin as possible, so we used a 30mm structural plywood and an oil finish,” says Sano. l