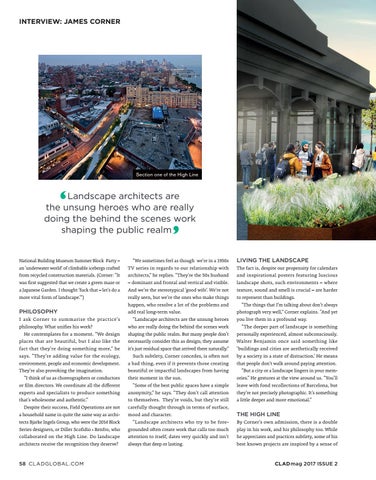 Section one of the High Line

National Building Museum Summer Block Party – an ‘underwater world’ of climbable icebergs crafted from recycled construction materials. (Corner: “It was first suggested that we create a green maze or a Japanese Garden. I thought ‘fuck that – let’s do a more vital form of landscape.’”)

PHILOSOPHY I ask Corner to summarise the practice’s philosophy. What unifies his work? He contemplates for a moment. “We design places that are beautiful, but I also like the fact that they’re doing something more,” he says. “They’re adding value for the ecology, environment, people and economic development. They’re also provoking the imagination. “I think of us as choreographers or conductors or film directors. We coordinate all the different experts and specialists to produce something that’s wholesome and authentic.” Despite their success, Field Operations are not a household name in quite the same way as architects Bjarke Ingels Group, who were the 2014 Block Series designers, or Diller Scofidio + Renfro, ho collaborated on the High Line. Do landscape architects receive the recognition they deserve?

“We sometimes feel as though we’re in a 1950s T V series in regards to our relationship with architects,” he replies. “They’re the 50s husband – dominant and frontal and vertical and visible. And we’re the stereotypical ‘good wife’. We’re not really seen, but we’re the ones who make things happen, who resolve a lot of the problems and add real long-term value. “Landscape architects are the unsung heroes who are really doing the behind the scenes work shaping the public realm. But many people don’t necessarily consider this as design; they assume it’s just residual space that arrived there naturally.” Such subtlety, Corner concedes, is often not a bad thing, even if it prevents those creating beautiful or impactful landscapes from having their moment in the sun. “Some of the best public spaces have a simple anonymity,” he says. “They don’t call attention to themselves. They’re voids, but they’re still carefully thought through in terms of surface, mood and character. “Landscape architects who try to be foregrounded often create work that calls too much attention to itself, dates very quickly and isn’t always that deep or lasting.

LIVING THE LANDSCAPE The fact is, despite our propensity for calendars and inspirational posters featuring luscious landscape shots, such environments – where texture, sound and smell is crucial – are harder to represent than buildings. “The things that I’m talking about don’t always photograph very well,” Corner explains. “And yet you live them in a profound way. “The deeper part of landscape is something personally experienced, almost subconsciously. Walter Benjamin once said something like ‘buildings and cities are aesthetically received by a society in a state of distraction.’ He means that people don’t walk around paying attention. “But a city or a landscape lingers in your memories.” He gestures at the view around us. “You’ll leave with fond recollections of Barcelona, but they’re not precisely photographic. It’s something a little deeper and more emotional.”

THE HIGH LINE By Corner’s own admission, there is a double play in his work, and his philosophy too. While he appreciates and practices subtlety, some of his best known projects are inspired by a sense of