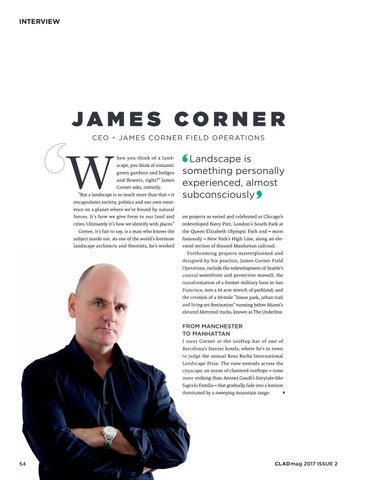 hen you think of a landscape, you think of romantic green gardens and hedges and flowers, right?” James Corner asks, intently. “But a landscape is so much more than that – it encapsulates society, politics and our own existence on a planet where we’re bound by natural forces. It’s how we give form to our land and cities. Ultimately it’s how we identify with places.” Corner, it’s fair to say, is a man who knows the subject inside out. As one of the world’s foremost landscape architects and theorists, he’s worked

Landscape is something personally experienced, almost subconsciously on projects as varied and celebrated as Chicago’s redeveloped Navy Pier, London’s South Park at the Queen Elizabeth Olympic Park and – most famously – New York’s High Line, along an elevated section of disused Manhattan railroad. Forthcoming projects masterplanned and designed by his practice, James Corner Field Operations, include the redevelopment of Seattle’s central waterfront and protective seawall; the transformation of a former military base in San Francisco, into a 14 acre stretch of parkland; and the creation of a 10-mile “linear park, urban trail and living art destination” running below Miami’s elevated Metrorail tracks, known as The Underline.

FROM MANCHESTER TO MANHATTAN I meet Corner at the rooftop bar of one of Barcelona’s fancier hotels, where he’s in town to judge the annual Rosa Barba International Landscape Prize. The view extends across the cityscape; an ocean of clustered rooftops – none more striking than Antoni Gaudi’s fairytale-like Sagrada Familia – that gradually fade into a horizon dominated by a sweeping mountain range.