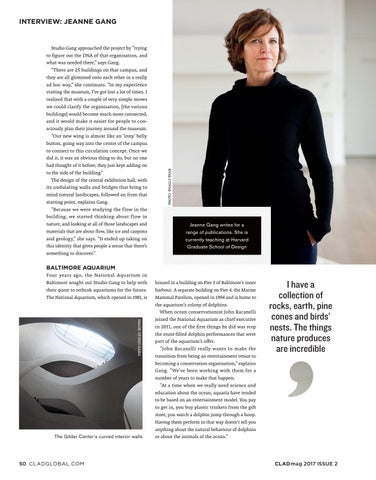 Studio Gang approached the project by “trying to figure out the DNA of that organisation, and what was needed there,” says Gang. “There are 25 buildings on that campus, and they are all glommed onto each other in a really ad hoc way,” she continues. “In my experience visiting the museum, I’ve got lost a lot of times. I realised that with a couple of very simple moves we could clarify the organisation, [the various buildings] would become much more connected, and it would make it easier for people to consciously plan their journey around the museum. “Our new wing is almost like an ‘inny’ belly button, going way into the centre of the campus to connect to this circulation concept. Once we did it, it was an obvious thing to do, but no one had thought of it before; they just kept adding on to the side of the building.” The design of the central exhibition hall, with its undulating walls and bridges that bring to mind natural landscapes, followed on from that starting point, explains Gang. “Because we were studying the flow in the building, we started thinking about flow in nature, and looking at all of those landscapes and materials that are about flow, like ice and canyons and geology,” she says. “It ended up taking on this identity that gives people a sense that there’s something to discover.”

Jeanne Gang writes for a range of publications. She is currently teaching at Harvard Graduate School of Design

housed in a building on Pier 3 of Baltimore’s inner harbour. A separate building on Pier 4, the Marine Mammal Pavilion, opened in 1994 and is home to the aquarium’s colony of dolphins. When ocean conservationist John Racanelli joined the National Aquarium as chief executive in 2011, one of the first things he did was stop the stunt-filled dolphin performances that were part of the aquarium’s offer. “John Racanelli really wants to make the transition from being an entertainment venue to becoming a conservation organisation,” explains Gang. “We’ve been working with them for a number of years to make that happen. “At a time when we really need science and education about the ocean, aquaria have tended to be based on an entertainment model. You pay to get in, you buy plastic trinkets from the gift store, you watch a dolphin jump through a hoop. Having them perform in that way doesn’t tell you anything about the natural behaviour of dolphins or about the animals of the ocean.”

I have a collection of rocks, earth, pine cones and birds’ nests. The things nature produces are incredible