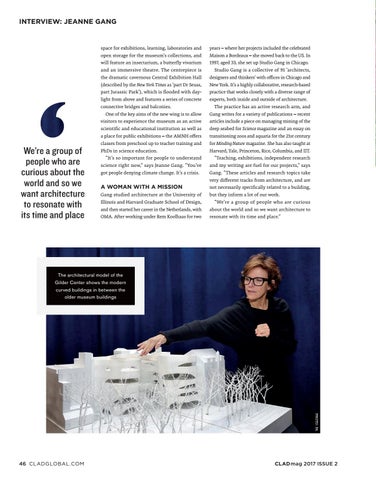 space for exhibitions, learning, laboratories and open storage for the museum’s collections, and will feature an insectarium, a butterfly vivarium and an immersive theatre. The centrepiece is the dramatic cavernous Central Exhibition Hall (described by the New York Times as ‘part Dr Seuss, part Jurassic Park’), which is flooded with daylight from above and features a series of concrete connective bridges and balconies. One of the key aims of the new wing is to allow visitors to experience the museum as an active scientific and educational institution as well as a place for public exhibitions – the AMNH offers classes from preschool up to teacher training and PhDs in science education. “It’s so important for people to understand science right now,” says Jeanne Gang. “You’ve got people denying climate change. It’s a crisis.

A WOMAN WITH A MISSION Gang studied architecture at the University of Illinois and Harvard Graduate School of Design, and then started her career in the Netherlands, with OMA. After working under Rem Koolhaas for two

years – where her projects included the celebrated Maison a Bordeaux – she moved back to the US. In 1997, aged 33, she set up Studio Gang in Chicago. Studio Gang is a collective of 91 ‘architects, designers and thinkers’ with offices in Chicago and New York. It’s a highly collaborative, research-based practice that works closely with a diverse range of experts, both inside and outside of architecture. The practice has an active research arm, and Gang writes for a variety of publications – recent articles include a piece on managing mining of the deep seabed for Science magazine and an essay on transitioning zoos and aquaria for the 21st century for Minding Nature magazine. She has also taught at Harvard, Yale, Princeton, Rice, Columbia, and IIT. “Teaching, exhibitions, independent research and my writing are fuel for our projects,” says Gang. “These articles and research topics take very different tracks from architecture, and are not necessarily specifically related to a building, but they inform a lot of our work. “We’re a group of people who are curious about the world and so we want architecture to resonate with its time and place.”