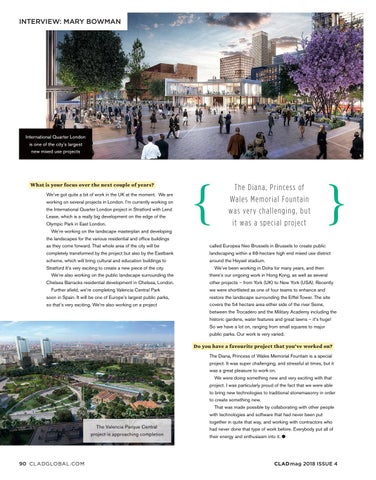 What is your focus over the next couple of years? We’ve got quite a bit of work in the UK at the moment. We are working on several projects in London. I’m currently working on the International Quarter London project in Stratford with Lend Lease, which is a really big development on the edge of the Olympic Park in East London.

T he Diana , Princes s of Wales Memorial Fountain was ver y challenging , but it was a special projec t

We’re working on the landscape masterplan and developing the landscapes for the various residential and office buildings as they come forward. That whole area of the city will be

completely transformed by the project but also by the Eastbank

landscaping within a 68-hectare high end mixed use district

scheme, which will bring cultural and education buildings to

around the Heysel stadium.

We’ve been working in Doha for many years, and then there’s our ongoing work in Hong Kong, as well as several other projects – from York (UK) to New York (USA). Recently we were shortlisted as one of four teams to enhance and

soon in Spain. It will be one of Europe’s largest public parks,

restore the landscape surrounding the Eiffel Tower. The site

so that’s very exciting. We’re also working on a project

covers the 54 hectare area either side of the river Seine, between the Trocadéro and the Military Academy including the historic gardens, water features and great lawns – it’s huge! So we have a lot on, ranging from small squares to major public parks. Our work is very varied.

Do you have a favourite project that you’ve worked on? The Diana, Princess of Wales Memorial Fountain is a special project. It was super challenging, and stressful at times, but it was a great pleasure to work on. We were doing something new and very exciting with that project. I was particularly proud of the fact that we were able to bring new technologies to traditional stonemasonry in order to create something new. That was made possible by collaborating with other people with technologies and software that had never been put The Valencia Parque Central project is approaching completion

together in quite that way, and working with contractors who had never done that type of work before. Everybody put all of their energy and enthusiasm into it. ●