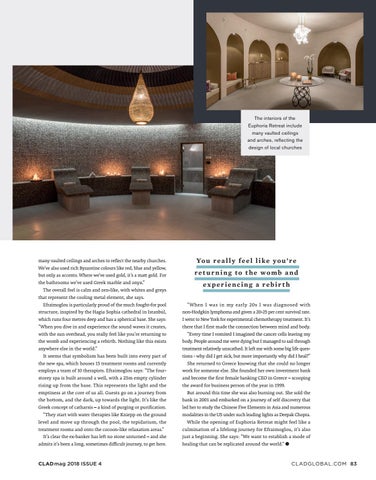 The interiors of the Euphoria Retreat include many vaulted ceilings and arches, reflecting the design of local churches

many vaulted ceilings and arches to reflect the nearby churches. We’ve also used rich Byzantine colours like red, blue and yellow, but only as accents. Where we’ve used gold, it’s a matt gold. For the bathrooms we’ve used Greek marble and onyx.” The overall feel is calm and zen-like, with whites and greys that represent the cooling metal element, she says. Efraimoglou is particularly proud of the much fought-for pool structure, inspired by the Hagia Sophia cathedral in Istanbul, which runs four metres deep and has a spherical base. She says: “When you dive in and experience the sound waves it creates, with the sun overhead, you really feel like you’re returning to the womb and experiencing a rebirth. Nothing like this exists anywhere else in the world.” It seems that symbolism has been built into every part of the new spa, which houses 15 treatment rooms and currently employs a team of 10 therapists. Efraimoglou says: “The fourstorey spa is built around a well, with a 25m empty cylinder rising up from the base. This represents the light and the emptiness at the core of us all. Guests go on a journey from the bottom, and the dark, up towards the light. It’s like the Greek concept of catharsis – a kind of purging or purification. “They start with water therapies like Kniepp on the ground level and move up through the pool, the tepidarium, the treatment rooms and onto the cocoon-like relaxation areas.” It’s clear the ex-banker has left no stone unturned – and she admits it’s been a long, sometimes difficult journey, to get here.

Yo u r e a l l y f e e l l i k e y o u ’ r e ret urning to the womb a nd experiencing a rebirth “ When I was in my early 20s I was diagnosed with non-Hodgkin lymphoma and given a 20-25 per cent survival rate. I went to New York for experimental chemotherapy treatment. It’s there that I first made the connection between mind and body. “Every time I vomited I imagined the cancer cells leaving my body. People around me were dying but I managed to sail through treatment relatively unscathed. It left me with some big life questions - why did I get sick, but more importantly why did I heal?” She returned to Greece knowing that she could no longer work for someone else. She founded her own investment bank and become the first female banking CEO in Greece – scooping the award for business person of the year in 1999. But around this time she was also burning out. She sold the bank in 2001 and embarked on a journey of self discovery that led her to study the Chinese Five Elements in Asia and numerous modalities in the US under such leading lights as Deepak Chopra. While the opening of Euphoria Retreat might feel like a culmination of a lifelong journey for Efraimoglou, it’s also just a beginning. She says: “We want to establish a mode of healing that can be replicated around the world.” l