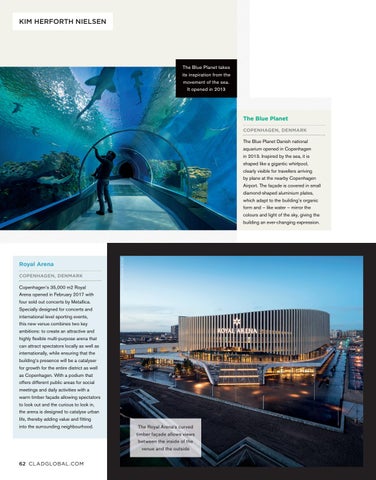 The Blue Planet takes its inspiration from the movement of the sea. It opened in 2013

The Blue Planet Danish national aquarium opened in Copenhagen in 2013. Inspired by the sea, it is shaped like a gigantic whirlpool, clearly visible for travellers arriving by plane at the nearby Copenhagen Airport. The façade is covered in small diamond-shaped aluminium plates, which adapt to the building’s organic form and – like water – mirror the colours and light of the sky, giving the

Arena opened in February 2017 with four sold out concerts by Metallica. Specially designed for concerts and international level sporting events, this new venue combines two key ambitions: to create an attractive and highly flexible multi-purpose arena that can attract spectators locally as well as internationally, while ensuring that the building’s presence will be a catalyser for growth for the entire district as well as Copenhagen. With a podium that offers different public areas for social meetings and daily activities with a warm timber façade allowing spectators to look out and the curious to look in, the arena is designed to catalyse urban life, thereby adding value and fitting into the surrounding neighbourhood.