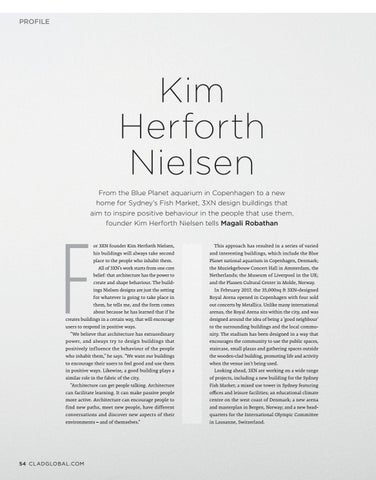 or 3XN founder Kim Herforth Nielsen, his buildings will always take second place to the people who inhabit them. All of 3XN’s work starts from one core belief: that architecture has the power to create and shape behaviour. The buildings Nielsen designs are just the setting for whatever is going to take place in them, he tells me, and the form comes about because he has learned that if he creates buildings in a certain way, that will encourage users to respond in positive ways. “We believe that architecture has extraordinary power, and always try to design buildings that positively influence the behaviour of the people who inhabit them,” he says. “We want our buildings to encourage their users to feel good and use them in positive ways. Likewise, a good building plays a similar role in the fabric of the city. “Architecture can get people talking. Architecture can facilitate learning. It can make passive people more active. Architecture can encourage people to find new paths, meet new people, have different conversations and discover new aspects of their environments – and of themselves.”

This approach has resulted in a series of varied and interesting buildings, which include the Blue Planet national aquarium in Copenhagen, Denmark; the Muziekgebouw Concert Hall in Amsterdam, the Netherlands; the Museum of Liverpool in the UK; and the Plassen Cultural Center in Molde, Norway. In February 2017, the 35,000sq ft 3XN-designed Royal Arena opened in Copenhagen with four sold out concerts by Metallica. Unlike many international arenas, the Royal Arena sits within the city, and was designed around the idea of being a ‘good neighbour’ to the surrounding buildings and the local community. The stadium has been designed in a way that encourages the community to use the public spaces, staircase, small plazas and gathering spaces outside the wooden-clad building, promoting life and activity when the venue isn’t being used. Looking ahead, 3XN are working on a wide range of projects, including a new building for the Sydney Fish Market; a mixed use tower in Sydney featuring offices and leisure facilities; an educational climate centre on the west coast of Denmark; a new arena and masterplan in Bergen, Norway; and a new headquarters for the International Olympic Committee in Lausanne, Switzerland.