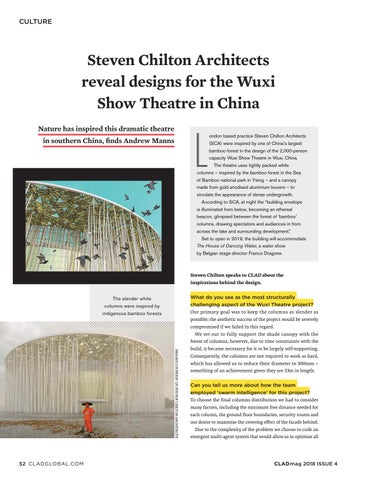 ondon based practice Steven Chilton Architects (SCA) were inspired by one of China’s largest bamboo forest in the design of the 2,000-person capacity Wuxi Show Theatre in Wuxi, China. The theatre uses tightly packed white

columns – inspired by the bamboo forest in the Sea of Bamboo national park in Yixing – and a canopy made from gold anodised aluminium louvers – to simulate the appearance of dense undergrowth. According to SCA, at night the “building envelope is illuminated from below, becoming an ethereal beacon, glimpsed between the forest of ‘bamboo’ columns, drawing spectators and audiences in from across the lake and surrounding development.” Set to open in 2019, the building will accommodate The House of Dancing Water, a water show by Belgian stage director Franco Dragone.

Steven Chilton speaks to CLAD about the inspirations behind the design. The slender white columns were inspired by indigenous bamboo forests

What do you see as the most structurally challenging aspect of the Wuxi Theatre project? Our primary goal was to keep the columns as slender as possible; the aesthetic success of the project would be severely compromised if we failed in this regard. We set out to fully support the shade canopy with the forest of columns, however, due to time constraints with the build, it became necessary for it to be largely self-supporting. Consequently, the columns are not required to work as hard, which has allowed us to reduce their diameter to 300mm – something of an achievement given they are 33m in length. Can you tell us more about how the team employed ‘swarm intelligence’ for this project? To choose the final columns distribution we had to consider many factors, including the minimum free distance needed for each column, the ground floor boundaries, security routes and our desire to maximise the covering effect of the facade behind. Due to the complexity of the problem we choose to code an emergent multi-agent system that would allow us to optimise all