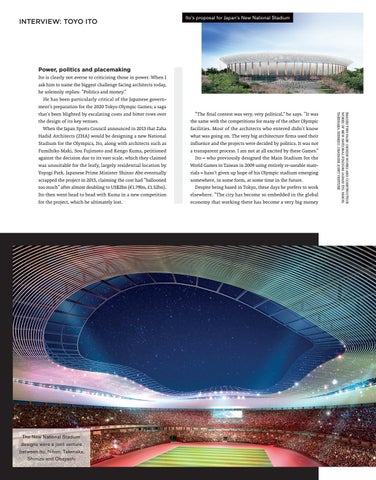 “The final contest was very, very political,” he says. “It was the same with the competitions for many of the other Olympic facilities. Most of the architects who entered didn’t know what was going on. The very big architecture firms used their influence and the projects were decided by politics. It was not a transparent process. I am not at all excited by these Games.” Ito – who previously designed the Main Stadium for the World Games in Taiwan in 2009 using entirely re-useable materials – hasn’t given up hope of his Olympic stadium emerging somewhere, in some form, at some time in the future. Despite being based in Tokyo, these days he prefers to work elsewhere. “The city has become so embedded in the global economy that working there has become a very big money

Ito is clearly not averse to criticising those in power. When I ask him to name the biggest challenge facing architects today, he solemnly replies: “Politics and money.” He has been particularly critical of the Japanese government’s preparation for the 2020 Tokyo Olympic Games; a saga that’s been blighted by escalating costs and bitter rows over the design of its key venues. When the Japan Sports Council announced in 2013 that Zaha Hadid Architects (ZHA) would be designing a new National Stadium for the Olympics, Ito, along with architects such as Fumihiko Maki, Sou Fujimoto and Kengo Kuma, petitioned against the decision due to its vast scale, which they claimed was unsuitable for the leafy, largely residential location by Yoyogi Park. Japanese Prime Minister Shinzo Abe eventually scrapped the project in 2015, claiming the cost had “ballooned too much” after almost doubling to US$2bn (€1.79bn, £1.52bn). Ito then went head to head with Kuma in a new competition for the project, which he ultimately lost.

The New National Stadium designs were a joint venture between Ito, Nihon, Takenaka, Shimizu and Obayashi