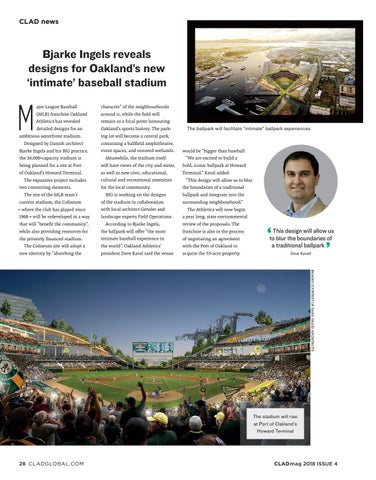 character” of the neighbourhoods

around it, while the field will

remain as a focal point honouring

detailed designs for an

Bjarke Ingels and his BIG practice,

Meanwhile, the stadium itself

would be “bigger than baseball “We are excited to build a

being planned for a site at Port

will have views of the city and water,

as well as new civic, educational,

The expansive project includes two connecting elements. The site of the MLB team’s

cultural and recreational amenities for the local community. BIG is working on the designs

of the stadium in collaboration

– where the club has played since

with local architect Gensler and

“This design will allow us to blur the boundaries of a traditional ballpark and integrate into the surrounding neighbourhood.” The Athletics will now begin a year long, state environmental

that will “benefit the community”,

According to Bjarke Ingels,

while also providing resources for

the ballpark will offer “the most

franchise is also in the process

of negotiating an agreement

with the Port of Oakland to

The Coliseum site will adopt a new identity by “absorbing the

review of the proposals. The

The stadium will rise at Port of Oakland’s Howard Terminal