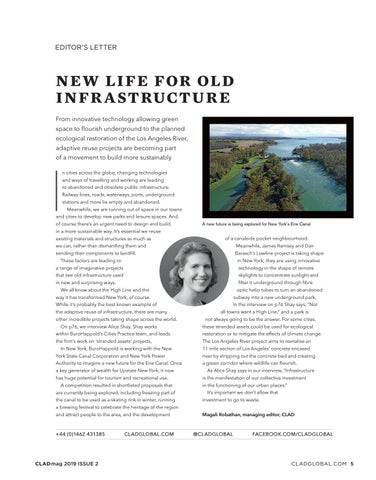 space to ﬂourish underground to the planned

ecological restoration of the Los Angeles River, adaptive reuse projects are becoming part of a movement to build more sustainably

n cities across the globe, changing technologies and ways of travelling and working are leading

to abandoned and obsolete public infrastructure.

Meanwhile, we are running out of space in our towns

and cities to develop new parks and leisure spaces. And of course there’s an urgent need to design and build in a more sustainable way. It’s essential we reuse existing materials and structures as much as we can, rather than dismantling them and

of a canalside pocket neighbourhood.

sending their components to landﬁll.

in New York; they are using innovative

These factors are leading to

technology in the shape of remote

a range of imaginative projects

skylights to concentrate sunlight and

ﬁlter it underground through ﬁbre

in new and surprising ways.

We all know about the High Line and the

subway into a new underground park.

way it has transformed New York, of course.

While it’s probably the best known example of

the adaptive reuse of infrastructure, there are many

other incredible projects taking shape across the world. On p76, we interview Alice Shay. Shay works

In New York, BuroHappold is working with the New

Authority to imagine a new future for the Erie Canal. Once a key generator of wealth for Upstate New York, it now has huge potential for tourism and recreational use.

A competition resulted in shortlisted proposals that

are currently being explored, including freezing part of

In the interview on p76 Shay says, “Not

all towns want a High Line,” and a park is

not always going to be the answer. For some cities,

these stranded assets could be used for ecological

restoration or to mitigate the effects of climate change. The Los Angeles River project aims to revitalise an 11 mile section of Los Angeles’ concrete encased

river by stripping out the concrete bed and creating a green corridor where wildlife can ﬂourish.

As Alice Shay says in our interview, “Infrastructure

is the manifestation of our collective investment in the functioning of our urban places.” It’s important we don’t allow that

the canal to be used as a skating rink in winter, running

investment to go to waste.

and attract people to the area, and the development

a brewing festival to celebrate the heritage of the region