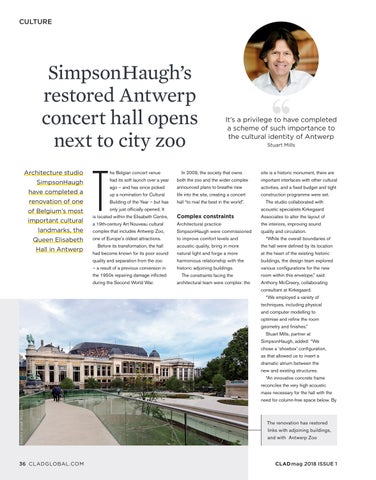 SimpsonHaugh’s restored Antwerp concert hall opens next to city zoo Architecture studio SimpsonHaugh have completed a renovation of one of Belgium’s most important cultural landmarks, the Queen Elisabeth Hall in Antwerp

site is a historic monument, there are

had its soft launch over a year

both the zoo and the wider complex

important interfaces with other cultural

ago – and has since picked

activities, and a fixed budget and tight

up a nomination for Cultural

life into the site, creating a concert

Building of the Year – but has

hall “to rival the best in the world”.

only just officially opened. It

is located within the Elisabeth Centre,

Associates to alter the layout of

one of Europe’s oldest attractions.

to improve comfort levels and

“While the overall boundaries of

Before its transformation, the hall

the hall were defined by its location

had become known for its poor sound

natural light and forge a more

at the heart of the existing historic

quality and separation from the zoo

harmonious relationship with the

– a result of a previous conversion in

various configurations for the new

The constraints facing the

during the Second World War.

architectural team were complex: the

room within this envelope,” said Anthony McCreery, collaborating consultant at Kirkegaard. “We employed a variety of techniques, including physical and computer modelling to optimise and refine the room geometry and finishes.” Stuart Mills, partner at SimpsonHaugh, added: “We chose a ‘shoebox’ configuration, as that allowed us to insert a dramatic atrium between the new and existing structures. “An innovative concrete frame reconciles the very high acoustic mass necessary for the hall with the

need for column-free space below. By

The renovation has restored links with adjoining buildings, and with Antwerp Zoo