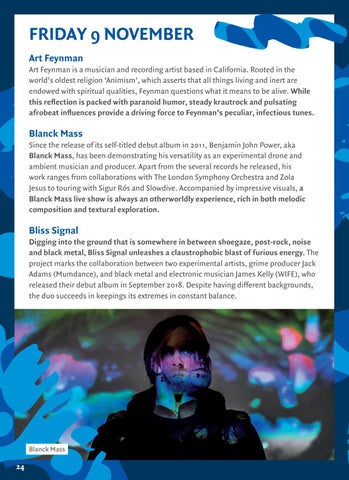 FRIDAY 9 NOVEMBER Art Feynman Art Feynman is a musician and recording artist based in California. Rooted in the world’s oldest religion ‘Animism’, which asserts that all things living and inert are endowed with spiritual qualities, Feynman questions what it means to be alive. While this reflection is packed with paranoid humor, steady krautrock and pulsating afrobeat influences provide a driving force to Feynman’s peculiar, infectious tunes.

Blanck Mass Since the release of its self-titled debut album in 2011, Benjamin John Power, aka Blanck Mass, has been demonstrating his versatility as an experimental drone and ambient musician and producer. Apart from the several records he released, his work ranges from collaborations with The London Symphony Orchestra and Zola Jesus to touring with Sigur Rós and Slowdive. Accompanied by impressive visuals, a Blanck Mass live show is always an otherworldly experience, rich in both melodic composition and textural exploration.

Bliss Signal Digging into the ground that is somewhere in between shoegaze, post-rock, noise and black metal, Bliss Signal unleashes a claustrophobic blast of furious energy. The project marks the collaboration between two experimental artists, grime producer Jack Adams (Mumdance), and black metal and electronic musician James Kelly (WIFE), who released their debut album in September 2018. Despite having different backgrounds, the duo succeeds in keepings its extremes in constant balance.

November 8-11 marks the 12th edition of Le Guess Who?, Holland’s most adventurous music festival. Genre-spanning performances from over 150 artists will take place in historic locations throughout the city center of Utrecht, with venues ranging from theaters and music clubs to churches, galleries and warehouses. In our program guide, you'll find all artist biographies, plus sections for Le Mini Who?, Lombok Festival, and our new satellite event 'Untitled', as well as a Utrecht Treasure Guide and several Illustrated Stories by Tukey's Bant Mag. 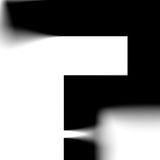