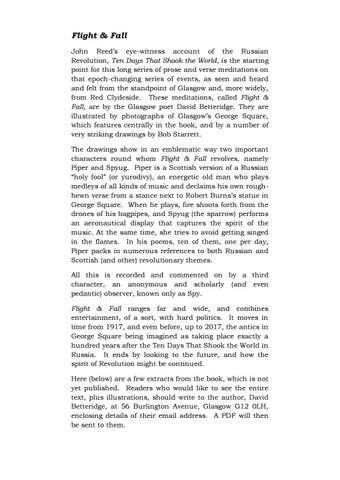 Flight &amp; Fall John Reed’s eye-witness account of the Russian Revolution, Ten Days That Shook the World, is the starting point for this long series of prose and verse meditations on that epoch-changing series of events, as seen and heard and felt from the standpoint of Glasgow and, more widely, from Red Clydeside. These meditations, called Flight &amp; Fall, are by the Glasgow poet David Betteridge. They are illustrated by photographs of Glasgow’s George Square, which features centrally in the book, and by a number of very striking drawings by Bob Starrett. The drawings show in an emblematic way two important characters round whom Flight &amp; Fall revolves, namely Piper and Spyug. Piper is a Scottish version of a Russian “holy fool” (or yurodivy), an energetic old man who plays medleys of all kinds of music and declaims his own roughhewn verse from a stance next to Robert Burns’s statue in George Square. When he plays, fire shoots forth from the drones of his bagpipes, and Spyug (the sparrow) performs an aeronautical display that captures the spirit of the music. At the same time, she tries to avoid getting singed in the flames. In his poems, ten of them, one per day, Piper packs in numerous references to both Russian and Scottish (and other) revolutionary themes. All this is recorded and commented on by a third character, an anonymous and scholarly (and even pedantic) observer, known only as Spy. Flight &amp; Fall ranges far and wide, and combines entertainment, of a sort, with hard politics. It moves in time from 1917, and even before, up to 2017, the antics in George Square being imagined as taking place exactly a hundred years after the Ten Days That Shook the World in Russia. It ends by looking to the future, and how the spirit of Revolution might be continued. Here (below) are a few extracts from the book, which is not yet published. Readers who would like to see the entire text, plus illustrations, should write to the author, David Betteridge, at 56 Burlington Avenue, Glasgow G12 0LH, enclosing details of their email address. A PDF will then be sent to them.

SHAKING THE WORLD Ten Days That Shook the World: even after a hundred years, these days resound. Here where I stand - here, as everywhere - I sense their aftershock. I am a seismographer. My feet press, like a quake-detecting elephant’s, hard on Glasgow’s laboured ground. Ten Days That Set the World Alight: still, to my mind’s eye I am a vulcanologist inextinguishably, they burn bright. Ten Days That Shaped the World, proclaiming Peace and Bread and Land: still they give form to how the world seems. I am a geometer, at least of souls. I trace these days’ firm lines and planes from Russia to this Martyrs’ Square, misnamed, for a king who was despised, “George Square”. Ten Days That (in one country) Blazed a Trail: still they show the world a route ahead, a route not followed far enough, or long. I am a cartographer. I have maps that Mercator never drew, that plot successive plantings of both Star and Flag. When will geo-politics require that we survey these maps anew? Ten Days sufficed to show on a world scale the truth of an old rule: that tyrants fall, their invincible armies rendered weak, their mined battlements torn down, their iron heel annulled. Let what can be shaken, be shaken I heard a Scottish bard say this, a Bolshevik by name, a hammerer and sickler of the world’s best Word; and the unshakeable remain. I am a historian. I see the workings of this rule, with trumpets, far-off in Joshua’s time,

and since, whenever subjects recognise at last their chains, and, breaking loose, withhold all loyalty from tyrant, czar, or prince The warld is ill divided I heard another bard say this, another Bolshevik, a spinner and a weaver of the world’s best Song. Them that works the hardest are the least provided. Like her, I calculate the wealth that the poor produce I am an economist - and find the sum is great; I also note the need that the rich have that we, with our little bread and no land, remain forgetting and innumerate. Many before me came in anger, or in hope, here to Martyrs’ Square, pressing their various feet here, hard, like Antaeus and me, drawing strength, overlooked by Rabbie Burns in bronze. (I murder Hate, Burns said... it’s comin yet... the man’s the gowd...) Year on year, they raised their placards and their May Day flags, impatient with the past, impassioned, proud. I am a hauntologist. I hear their voices still. They sensed the same shock-waves that Russia sent, that tremor me. They have entered history, and so will we.

JOHN MACLEAN, MARY BARBOUR AND OTHERS One known to thousands stood his ground, and stood the People’s ground, here at the city’s open heart. This hero never swerved. Time after time - his favoured stance not yards from mine - he spoke at an epoch’s end, willing another’s start. As Fighting Dominie, he took his blackboard and his theorems of Class beyond the classroom to the factory gate; and, echoing Moses’ God,

Thou shalt not steal, he said, thou shalt not kill. As Lenin’s Consul, always he squared his conscience and his intellect. His instinct for the Good was consummate.

As the Accuser, he brought a culprit Capital to trial; dripping with blood, he said, infamous and evil, charging it with larceny and homicide, before the High Court banged him up in solitary, in Peterhead. Archivist-cum-activist, his daughter Nan typed out his words, and published them. They, like the man himself, were krassivy: krassivy, both beautiful and red. We have learned much from them. Belatedly, another warrior’s name, Mary Barbour, Councillor and Justicer, has come to proper fame. She championed Peace and Women’s Rights fairness, indeed, in its every form when War and Men, as now, boomed loud, fomenting strife. No task requiring to be done too small, nor yet too daunting, for this phenomenon! Her great heart moved her unwaveringly to fight; she in turned moved others, even an “Army” of twenty-thousand at a time, one signal time. We remember her, but there are some, essential souls, the majority, foot-soldiers in this city’s tale, whose names are lost, hidden in forgetting’s night. If I could, I would compose a verse for each, a million verses if need be, and play a pibroch on my pipes in praise of them; like Old Mortality, I’d lead these uncountables from oblivion into day, honouring them in clear sight.

COME ALL YE! Come all ye! Join us, those of you who make the desert green, turn stone to bread, and bread to song; who fabricate and put to use each world-redeeming tool; who use your knowledge of the properties of land and water, air and fire to conjure Culture out of Natureâ&amp;#x20AC;&amp;#x2122;s soil. Join us, those of you whose lives are lessened from the total good that life should bring,

whose souls are coffined, hopes thinned: you have more to give, and you deserve that you be given more, much more, than those who steal the wealth that you and others make: they only take. Come all ye! Starvelings, slumberers, and enraged; labourers of brain-cum-hand and hand-cum-brain, it’s all the same; tomorrow’s veterans or, returning from oblivion, the past’s have-beens: all of you, without distinction, each last one, must come and join. Like the firm-rooted marram grass in its horizontal spread, we, the People, will advance, equally in fertile as in stony tracts, mis-titled dead! We who have existence of whatever kind, whether at the edge, or at an empire’s hub, whether we come from far or near, we are all of us components of a single world, contributors and inheritors, essential and compeer. Those who speak of “great” and “little” lack true measure, and mis-call. A king’s reign or queen’s is no more worthy of our study than any back-street sparrow’s flight, or sparrow’s fall. The dolphin and the lifted wave require the sea’s deep. Millions keep alive the common tongue that wisest sage or seer speak. Commit to us! We are the Bolsheviki of the present age, the world’s most suffering and most creative class, no more to be estranged.

The status quo shifts restlessly; a rising flood of tremors agitates beneath; rifts in what we thought was solid mass appear. Deep energy demands release. Now is our time of turning and of taking back! Now is our time of sharing all best things, making good at last the worldâ&amp;#x20AC;&amp;#x2122;s lack! Come all ye! 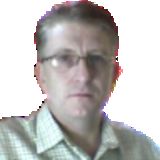