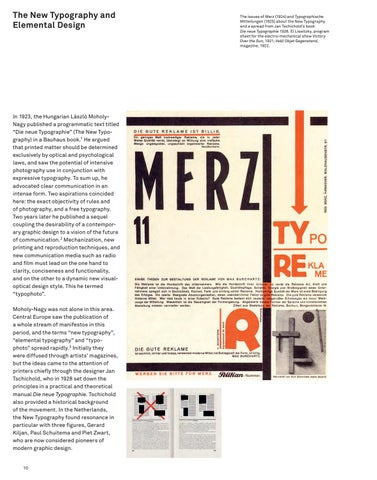 The New Typography and Elemental Design

The issues of Merz (1924) and Typographische Mitteilungen (1925) about the New Typography and a spread from Jan Tschichold’s book Die neue Typographie 1928. El Lissitzky, program sheet for the electro-mechanical show Victory Over the Sun, 1921; Veš cˇ Objet Gegenstand, magazine, 1922.

In 1923, the Hungarian László MoholyNagy published a programmatic text titled “Die neue Typographie” (The New Typography) in a Bauhaus book.1 He argued that printed matter should be determined exclusively by optical and psychological laws, and saw the potential of intensive photography use in conjunction with expressive typography. To sum up, he advocated clear communication in an intense form. Two aspirations coincided here: the exact objectivity of rules and of photography, and a free typography. Two years later he published a sequel coupling the desirability of a contemporary graphic design to a vision of the future of com­munication.2 Mechanization, new printing and reproduction techniques, and new communication media such as radio and film must lead on the one hand to clarity, conciseness and functionality, and on the other to a dynamic new visualoptical design style. This he termed “typophoto”. Moholy-Nagy was not alone in this area. Central Europe saw the publication of a whole stream of manifestos in this period, and the terms “new typography”, “elemental typography” and “typophoto” spread rapidly.3 Initially they were diffused through artists’ magazines, but the ideas came to the attention of printers chiefly through the designer Jan Tschichold, who in 1928 set down the principles in a practical and theoretical manual Die neue Typographie. Tschichold also provided a historical background of the movement. In the Netherlands, the New Typography found resonance in particular with three figures, Gerard Kiljan, Paul Schuitema and Piet Zwart, who are now considered pioneers of modern graphic design.