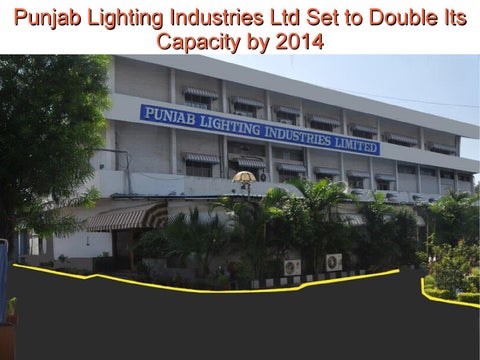 Punjab Lighting Industries Ltd Set to Double Its Capacity by 2014

Punjab is famous for its agricultural products and healthy lifestyle. The state has also seen huge industrialization in recent years. Following the trend, Punjab has also earned a good name for the quality of its industrial products. Various industries have proliferated here. Many of these industries are not only limited to serve a particular city, state, or country, but have expanded their business horizons beyond borders. They are supplying goods to several manufacturers o international repute. One of such companies in the territory is Punjab Lighting Industries Ltd, which has achieved tremendous success in last decade and is continue on its growth trend.

Punjab Lighting Aids Pvt. Ltd was formed in the year 1992-93. “We had started manufacturing of LIW in the year 1994” informs a company representative, “Ou initial production capacity was 60 million pieces annually. The good quality of ou products got appreciated nationally and internationally too and we soon had to increase our capacity to 500 million pieces in 1996, and further to 1200 million pieces in the year 1999” he adds. Good quality of products is the only parameter to achieve success in international market. You can sure earn some quick benefits by selling poor quality products at lower cost, but in the long term, only quality wins The same has been proved by the promoter of Punjab Lighting.

“We had acquired a credential for the quality of our products i.e. ISO 9001 in the year 2000. Our endeavourers to achieve excellence in the industry was rightly acknowledged through many prestigious awards such as Rashtriya Rattan Award, Bharat Jyoti Award, International Gold Star Millennium Award, etc.” informs the company representative, “In the year 2005, we have received Supplier of the Year award from Philips, and Zero Defect award from Crompton Greaves” he adds. The company has been continuously improving product quality and has been strengthening its business ethics. It has registered for ISO 14001 &amp; OHSAS 18001 Environment, Health &amp; Safety Certification in the year 2005, and had bagged several new contracts for the regular supply of accessories. Punjab Lighting had expanded its capacity to 2000 million LIW per annum in the year 2006. Next year, it started manufacturing of other related products viz. Aluminum caps for tube lights, Hard Glass Wires (HID Plant) and Strand Wires. Philips presented it with Ship to Stock as National Achievement award.

Besides lighting component manufacturing, Punjab Lighting Industries Ltd has also started manufacturing of CFL &amp; GLS Lamp caps and had further increased its capacity to 7520 million pieces in the year 2010. The company has plans to further expand the capacity by 100% by the year 2014. The state of the Punjab has earned a good reputation for the manufacturing of lighting component today. Many national and international manufacturers are outsourcing their requirements to the state. The sole reason behind this huge popularity of the industries here is excellent quality of components being produced here. â&amp;#x20AC;&amp;#x153;We see brighter prospects in future for the quality conscious manufacturers in Punjabâ&amp;#x20AC;? ends the company person.