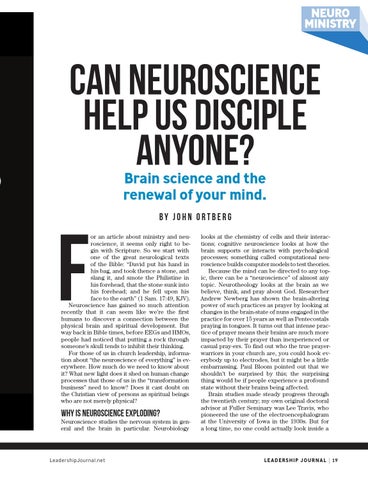 Can Neuroscience Help Us Disciple Anyone? Brain science and the renewal of your mind.

or an article about ministry and neuroscience, it seems only right to begin with Scripture. So we start with one of the great neurological texts of the Bible: “David put his hand in his bag, and took thence a stone, and slang it, and smote the Philistine in his forehead, that the stone sunk into his forehead; and he fell upon his face to the earth” (1 Sam. 17:49, KJV). Neuroscience has gained so much attention recently that it can seem like we’re the first humans to discover a connection between the physical brain and spiritual development. But way back in Bible times, before EEGs and HMOs, people had noticed that putting a rock through someone’s skull tends to inhibit their thinking. For those of us in church leadership, information about “the neuroscience of everything” is everywhere. How much do we need to know about it? What new light does it shed on human change processes that those of us in the “transformation business” need to know? Does it cast doubt on the Christian view of persons as spiritual beings who are not merely physical?

WHY IS NEUROSCIENCE EXPLODING?

Neuroscience studies the nervous system in general and the brain in particular. Neurobiology

looks at the chemistry of cells and their interactions; cognitive neuroscience looks at how the brain supports or interacts with psychological processes; something called computational neuroscience builds computer models to test theories. Because the mind can be directed to any topic, there can be a “neuroscience” of almost any topic. Neurotheology looks at the brain as we believe, think, and pray about God. Researcher Andrew Newberg has shown the brain-altering power of such practices as prayer by looking at changes in the brain-state of nuns engaged in the practice for over 15 years as well as Pentecostals praying in tongues. It turns out that intense practice of prayer means their brains are much more impacted by their prayer than inexperienced or casual pray-ers. To find out who the true prayerwarriors in your church are, you could hook everybody up to electrodes, but it might be a little embarrassing. Paul Bloom pointed out that we shouldn’t be surprised by this; the surprising thing would be if people experience a profound state without their brains being affected. Brain studies made steady progress through the twentieth century; my own original doctoral advisor at Fuller Seminary was Lee Travis, who pioneered the use of the electroencephalogram at the University of Iowa in the 1930s. But for a long time, no one could actually look inside a