Horse of the Future 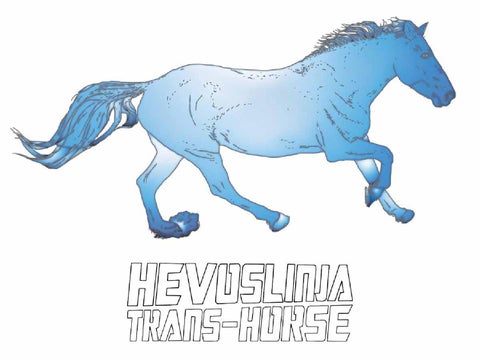 Ore.e Refineries (in short) - Introducing Jesse Sipola, blacksmith and designer - Mission to bust myths concerning crafts and sustainable design. Post-Oil? How can move from city to other after that?

- Hanna Karppinen and Pietari Kylm채l채 - 9 months of work. Last weekend was the last riding trip. Helsinki Turku 260km by horse! - We are looking to expand to Middle Finland 2015

The (short) History of Horses as Technical Resources - Weâ&amp;#x20AC;&amp;#x2122;ve seen horses as technical resource - We are good comrades and our relationship was interdependent BUT

- They are means of labor, fuel and food - Horses are part of nearly every cultures myths - Some of the first artworks in caves where of horses

- After taming. The were used to pull sledges. Riding came later. It took 4000 years to develop stirrups! - Imagine whatâ&amp;#x20AC;&amp;#x2122;s gonna happen to the technique of riding in the next 2000 years!

Looking at Europe - The role of horses in Europe is best understood when looking at war history. Horses are involved in crucial battles. - The breeding of horses is a form of biological warfare?

- Napoleonâ&amp;#x20AC;&amp;#x2122;s troops attacking Russian. - Soldiers cut their horses up and hid in their bellies in the storms - Horses are still used in war

- Luddites smash machinery. Workers unite and form unions - Child labor was abolished in England - BUT this resulted into the development of a new breed Pit Ponies

- Finns know the Finnhorse. It was defined 1907. On the eve of the “national awakening” -It’s character mimics national ideals “hardworking, honest”. 90% Chestnut - Finnhorse had a part in WWI&amp;II

- Horse was replaced by the combustion engine! Future of Horses as Non-Technical Resources - Horse culture is more civilised in Monarchies. Ceremonies, ritualsâ&amp;#x20AC;Ś

- In Finland by the 1970 non-military families begun taking an intrest in riding - Sports and hobbies save the horse. A new work-site emergesâ&amp;#x20AC;Ś - Horses building identity

- Work no longer defines who we are.. Majority of us work â&amp;#x20AC;&amp;#x153;behind a deskâ&amp;#x20AC;? - Only hobbies and lifestyles differentiate us - When you use the animal for a hobby the relationship is different

- Hipsters on the working-horse workshop are not â&amp;#x20AC;&amp;#x153;workingâ&amp;#x20AC;? they are sharing an experience - Focus is in the relationship with the animal - Horse is a drama-instructor. Educational services are big business

- New industry: Therapy Horses! - Our relation to animals is narrative. We tell stories about them - Not all is transference.. Itâ&amp;#x20AC;&amp;#x2122;s also localized behavioral science!

- Gentrification forces stables away from city centers. No hiking/travel routes, pastures are developed by the cities - The danger is that people and animals separate completely! From being invisible, to being extinct!

- For the sake of biodiversity! - What if horses viewpoint would be embedded in urban planning projects? - How to: Develop design thinking which facilitates animal rights?

- First this looks like we’d be using the horse as a technical resource but look again! - The story adds value to the product: “100% Chopped by Natural Horsepower”

- G-Street Viewâ&amp;#x201E;˘ mimics the horseback riders perspective - Horses are echos of our past but they effect our thinking - Self driving car? Horse

Horse of the Future