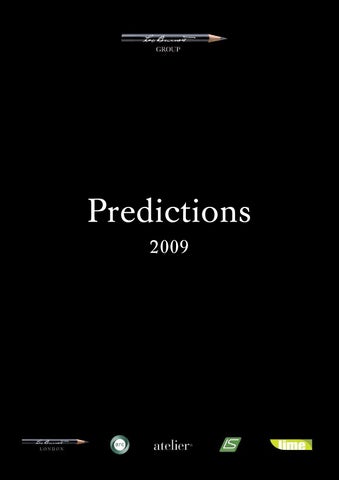 New Realism. Economic conditions will profoundly affect our cultural context moving forward. The speculative and emotive era - which went hand in hand with rising affluence - is being replaced by a much more grounded social and creative phase. The Wire has burst the bubblegum aesthetic on TV and in Hollywood; deeper human narratives have already recast Batman and Bond as more realistic cultural icons. As our creative content becomes more tangible and honest in reflection, we will be forced to be more realistic about everything over the coming years. This applies both to our economic confidence and our cultural outlook. The human story will be one of value reflection and reassessment, as both our priorities and purchases are examined in light of what is truly meaningful to us. As the language of hopes and dreams is replaced by one of pragmatism and prudence, new value systems will emerge. We will be more open to expressions that are confident, secure, uplifting, connected, honest and progressive.

Hyper Reality. The pace of change is accelerating around the world. As a post-racial America emerges with Barack Obama at the helm, it is telling that just 6 weeks before voting the deciding issue of the election changed - such was the speed of the financial crisis. In India, tragic events in Mumbai were recorded live on Twitter by those involved, becoming the first record of history - a real time record that fed back and began influencing and accelerating the event itself i . Major developments are now happening at lightning speed and changing status quos are revealed in real time with very real consequences. Managing this era of trend flux has far-reaching consequences for all areas of society. Governments will be judged by how they manage change and, ironically, by how much they bring about - change itself has become the mantra of modern politics. Businesses will face major challenges to keep up with and evolve to meet peopleâ&#x20AC;&#x2122;s rapidly changing needs. As economies, societies and cultures are recast, the need to know whatâ&#x20AC;&#x2122;s next has never been greater.

The Trust Economy. Trust is set to become a critical success factor for brands in 2009. Where we place our trust is changing dramatically. Supermarkets are now more trusted than banks around the world ii marking a seismic shift in the global commercial landscape. Banks were founded on the principle of trust and it has been integral to their DNA since the 1700s. As our faith in financial institutions evaporates other business will benefit, especially those we feel act directly in our interests. In turbulent times we look to organisations that share our concerns, manage anxiety and take the lead. With the trust spectrum up for grabs, organisations that show they are going the extra mile for people will prosper. Supermarkets in particular have positioned themselves as consumer champions for some time and look set to benefit in this new era. Keep an eye out for this development in personal finance. In 2009 Tesco will launch its first current account in the U K and is openly reporting that it is aiming to fill the trust gap in this sector iii .

Eco Austerity. Being green was once costly, time consuming and a matter of conscience. A major juncture is about to be reached in the future of the planet as austerity turns the environmental case into an economic one. Energy efficiency saves money as well as the planet, and the uptake of this critical message is about to define our future development. A new paradigm is being defined in car manufacturing with the development of performance -efficient vehicles. This represents an early sign that environmental progress can fall in line with corporate economies of scale. This will not be the same in every sector, but in critical areas like transport and energy a corner is being turned. For those of us who have somehow rejected being green to date, a light bulb which lasts longer, uses less energy and is cheaper simply canâ&#x20AC;&#x2122;t be argued against. The recession will hijack the green argument, turning it from a moral argument to an economic one.

Digital.tv. The Internet will not kill television as some have predicted, but will be its salvation. While no media has ever replaced another, TV has been trapped in a corner for some time. In 2009 we will reach the tipping point for broadcast quality Internet Television. At the end of 2008, the industry body for U K television, Thinkbox, reported that more people were watching the major broadcaster’s online channels than YouTube – with the B BC’s iPlayer alone having more reach than the Internet giant iv . Add to this the fact that .tv domain registrations grew by 40% globally in 2008 v and the scale of the shift in 2009 becomes clear. Yes, people have been watching TV online for some time, but watching TV on YouTube is not the most satisfying experience a bit like watching YouTube clips on TV. This year such painful experiences will become a thing of the past as media neutral TV finally goes mainstream. With pressures on advertising revenue, the big players will be flexing their muscles in cost negotiations and weighing in with digital audience figures alongside offline data. Marketers will also be fine tuning their thinking to reflect this new reality and reinventing ways to stay relevant amongst streamed and on-demand broadcast quality TV content.

Thread Marketing. Creativity now has so many media canvases it is increasingly not bound to any traditional format. Damien Hirst already has painting, poetry, sculpture, interior design, taxidermy and jewellery making in his portfolio. While his list of formats is endless, Hirstâ&#x20AC;&#x2122;s output exists as one body of work. Echoing the art world commercial organisations will be racing to allow their output to exist in many new formats. Their content will need to be free from central control and tradable in the new networks - tomorrowâ&#x20AC;&#x2122;s Facebook or Bebo. The aim will be not to drive people to a home page but to scatter diverse pieces of content in multiple contexts and thread them back to the brand. In this emerging era unifying ideas, brand logos or simple short codes will form the threads that link content together. As many adverts already carry U RLs, in the future we will see bus ads linking to desktop widgets, on-pack promos leading to corporate -led films, and so on ad infinitum. In coming years these threads will become culturally embedded. Audiences will make these multimedia links subconsciously and will expect the content to be available to them whatever cultural domain they happen to be in.

Generation Game. Video games used to be the preserve of disenchanted adolescents, but as gaming becomes a truly mass pursuit, soon we will all be part of Generation Game. Ever since the camera was turned round in the first Wii advert (which showed what the players experienced, not the game they were playing) the accessibility of the medium has exploded. They can help us keep fit and improve our mental skills - no wonder games are set to be the biggest selling entertainment item in the U K this Christmas (2008) vi . With economic pressures set to encourage us homewards, the cultural clout of gaming will be further accelerated. The future of the medium is unlimited as the educational potential and social networking possibilities of games platforms are further explored. Gaming will be a fulcrum for future innovation across multiple areas. Did you know Barack Obama advertised in the Xbox 360 game Burnout: Paradise? vii. Did you know the Fifa 09 development team includes people from 18 different countries speaking 20 different languages? viii. Did you ever expect to be playing tennis with your granny in the living room?! No? Well donâ&#x20AC;&#x2122;t be surprised when gaming pushes things even further beyond our current comprehension.

The End of Fact. Perceived wisdom now changes on a daily basis. As we move into an ever-chunkier soup of ‘fact’, expect more contradictory opinions and diverse solutions being presented as definitive. Try running a Google search on ‘wine and cancer’ and you’re immediately hit with a range of stories claiming that wine is both a cure and a cause. Fact checking is becoming a thing of the past as online opinions blur the line between truth and hearsay. In the future we will cherrypick what constitutes fact. It will be the modern equivalent of the hypochondriac with the medical textbook. For organisations in the ‘fact’ business this is both a threat and an opportunity. For brands in general authority will increasingly become a key communication metric and for media organisations editorial oversight will be a key differentiator. In a time when truth is more contested than ever, objectivity and impartiality will become rarefied and more in demand.

Brands as Vehicles. Brands are landing points; we follow our needs and invariably end up at a brand. This is all set to change. The brands of the future will be vehicles and not just destinations. The success stories of the last decade were built on this principle; Google and YouTube being the two most prominent human gateways. Our journey does not finish with Google and YouTube, that’s where it starts. While sponsorship is in vogue at present, enabling people goes a lot deeper than patronage. Any company can spend money buying funky media, sponsoring an event or plastering logos on entertainment content, but there’s a gulf of difference between that and actually helping people broaden their horizons. McDonald’s is rolling out free in-store Wi-Fi around the world, making its outlets a jumping-off point for any inspiring experience. Groove Armada has signed an exclusive deal with Bacardi rather than a record label - an unlikely creative partnership that has raised the band’s creative flexibility and made Bacardi a trailblazing brand vehicle. The days of the static brand are increasingly numbered, as they become a means and not an end. In the future brands will live and, if they are any good, we will want to live our lives through them. How will people cope with the downturn? How will marketing change next year? What will businesses be desperate to communicate? Will peopl...

How will people cope with the downturn? How will marketing change next year? What will businesses be desperate to communicate? Will peopl...