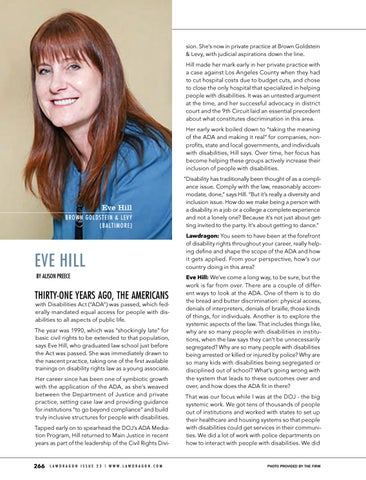 sion. She’s now in private practice at Brown Goldstein & Levy, with judicial aspirations down the line. Hill made her mark early in her private practice with a case against Los Angeles County when they had to cut hospital costs due to budget cuts, and chose to close the only hospital that specialized in helping people with disabilities. It was an untested argument at the time, and her successful advocacy in district court and the 9th Circuit laid an essential precedent about what constitutes discrimination in this area. Her early work boiled down to “taking the meaning of the ADA and making it real” for companies, nonproﬁts, state and local governments, and individuals with disabilities, Hill says. Over time, her focus has become helping these groups actively increase their inclusion of people with disabilities.

THIRTY-ONE YEARS AGO, THE AMERICANS

with Disabilities Act (“ADA”) was passed, which federally mandated equal access for people with disabilities to all aspects of public life.

The year was 1990, which was “shockingly late” for basic civil rights to be extended to that population, says Eve Hill, who graduated law school just before the Act was passed. She was immediately drawn to the nascent practice, taking one of the ﬁrst available trainings on disability rights law as a young associate. Her career since has been one of symbiotic growth with the application of the ADA, as she’s weaved between the Department of Justice and private practice, setting case law and providing guidance for institutions “to go beyond compliance” and build truly inclusive structures for people with disabilities. Tapped early on to spearhead the DOJ’s ADA Mediation Program, Hill returned to Main Justice in recent years as part of the leadership of the Civil Rights Divi266

“Disability has traditionally been thought of as a compliance issue. Comply with the law, reasonably accommodate, done,” says Hill. “But it’s really a diversity and inclusion issue. How do we make being a person with a disability in a job or a college a complete experience and not a lonely one? Because it’s not just about getting invited to the party. It’s about getting to dance.” Lawdragon: You seem to have been at the forefront of disability rights throughout your career, really helping deﬁne and shape the scope of the ADA and how it gets applied. From your perspective, how’s our country doing in this area? Eve Hill: We’ve come a long way, to be sure, but the work is far from over. There are a couple of different ways to look at the ADA. One of them is to do the bread and butter discrimination: physical access, denials of interpreters, denials of braille, those kinds of things, for individuals. Another is to explore the systemic aspects of the law. That includes things like, why are so many people with disabilities in institutions, when the law says they can’t be unnecessarily segregated? Why are so many people with disabilities being arrested or killed or injured by police? Why are so many kids with disabilities being segregated or disciplined out of school? What’s going wrong with the system that leads to these outcomes over and over, and how does the ADA ﬁt in there? That was our focus while I was at the DOJ - the big systemic work. We got tens of thousands of people out of institutions and worked with states to set up their healthcare and housing systems so that people with disabilities could get services in their communities. We did a lot of work with police departments on how to interact with people with disabilities. We did

PHOTO PROVIDED BY THE FIRM We are proud to present the 2021 edition of The Plaintiff Issue, featuring the best of the plaintiff bar across financial, consumer and empl...

We are proud to present the 2021 edition of The Plaintiff Issue, featuring the best of the plaintiff bar across financial, consumer and empl...