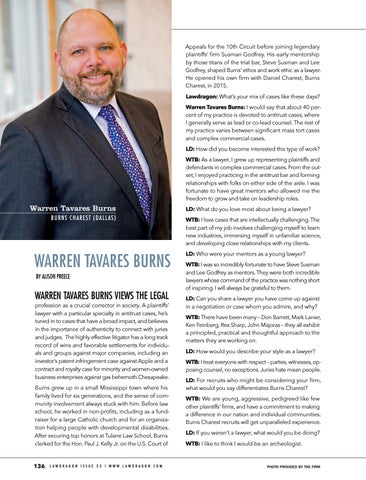 Appeals for the 10th Circuit before joining legendary plaintiffs’ ﬁrm Susman Godfrey. His early mentorship by those titans of the trial bar, Steve Susman and Lee Godfrey, shaped Burns’ ethos and work ethic as a lawyer. He opened his own ﬁrm with Daniel Charest, Burns Charest, in 2015. Lawdragon: What’s your mix of cases like these days? Warren Tavares Burns: I would say that about 40 percent of my practice is devoted to antitrust cases, where I generally serve as lead or co-lead counsel. The rest of my practice varies between signiﬁcant mass tort cases and complex commercial cases. LD: How did you become interested this type of work? WTB: As a lawyer, I grew up representing plaintiffs and defendants in complex commercial cases. From the outset, I enjoyed practicing in the antitrust bar and forming relationships with folks on either side of the aisle. I was fortunate to have great mentors who allowed me the freedom to grow and take on leadership roles.

profession as a crucial corrector in society. A plaintiffs’ lawyer with a particular specialty in antitrust cases, he’s tuned in to cases that have a broad impact, and believes in the importance of authenticity to connect with juries and judges. The highly effective litigator has a long track record of wins and favorable settlements for individuals and groups against major companies, including an investor’s patent infringement case against Apple and a contract and royalty case for minority and women-owned business enterprises against gas behemoth Chesapeake.

Burns grew up in a small Mississippi town where his family lived for six generations, and the sense of community involvement always stuck with him. Before law school, he worked in non-proﬁts, including as a fundraiser for a large Catholic church and for an organization helping people with developmental disabilities. After securing top honors at Tulane Law School, Burns clerked for the Hon. Paul J. Kelly Jr. on the U.S. Court of 136

LD: What do you love most about being a lawyer? WTB: I love cases that are intellectually challenging. The best part of my job involves challenging myself to learn new industries, immersing myself in unfamiliar science, and developing close relationships with my clients. LD: Who were your mentors as a young lawyer? WTB: I was so incredibly fortunate to have Steve Susman and Lee Godfrey as mentors. They were both incredible lawyers whose command of the practice was nothing short of inspiring. I will always be grateful to them. LD: Can you share a lawyer you have come up against in a negotiation or case whom you admire, and why? WTB: There have been many – Don Barrett, Mark Lanier, Ken Feinberg, Rex Sharp, John Majoras – they all exhibit a principled, practical and thoughtful approach to the matters they are working on. LD: How would you describe your style as a lawyer? WTB: I treat everyone with respect – parties, witnesses, opposing counsel, no exceptions. Juries hate mean people. LD: For recruits who might be considering your ﬁrm, what would you say differentiates Burns Charest? WTB: We are young, aggressive, pedigreed like few other plaintiffs’ ﬁrms, and have a commitment to making a difference in our nation and individual communities. Burns Charest recruits will get unparalleled experience. LD: If you weren’t a lawyer, what would you be doing? WTB: I like to think I would be an archeologist.

PHOTO PROVIDED BY THE FIRM

We are proud to present the 2021 edition of The Plaintiff Issue, featuring the best of the plaintiff bar across financial, consumer and employment practices. At a time when Covid has largely shut courtrooms, these 1,500 lawyers continued to fight for injured people and their families as well as defrauded consumers and investors.