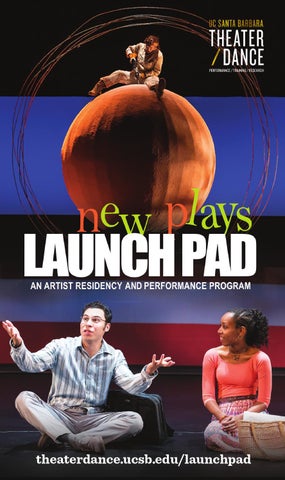 RISA BRAININ, ARTISTIC DIRECTOR Welcome to LAUNCH PAD! We started this program in 2005, and are proud to have supported so many great playwrights and plays on their journey from incubation to professional world premiere! The concept of the “Preview Production” is unique in American theater: a fully realized production of a new play without the pressures of the commercial world, the play stays in previews throughout the run of the show, allowing the writer to continue revising as the piece evolves through performance. We are excited to have you join us for these fresh, provocative, entertaining new plays! Be there from the beginning, and you can say “Hey! I saw that play at UCSB before anyone else.”

THE PLAYS AND PLAYWRIGHTS

Since its inception in 2005, LAUNCH PAD has produced a series of plays by distinguished writers. Melancholy Play by Sarah Ruhl The Dinosaur Within by John Walch Plumfield, Iraq by Barbara Lebow La Niñera: The Nursemaid by Barbara Lebow Kingdom City by Sheri Wilner Biederman’s Match by Beau Willimon (book), Michelle DiBucci (music), Portia Kamons (lyrics) Entangled by Lila Rose Kaplan Appoggiatura by James Still Untitled IV by Ruth Markofsky by Alison Tatlock The Talented Ones by Yussef El Guindi We Want the Funk, a rustbelt lullaby on the one! by Idris Goodwin

PREVIEW PRODUCTIONS Featured in American Theatre magazine as an innovative model of new play development in the US, LAUNCH PAD is a high-tech lab for playwrightsin-residence, aspiring theater students, faculty and guest artists. Led by founding Artistic Director Risa Brainin, a new play is developed each year. The residency culminates in a fully realized “Preview Production.” With a mix of student and professional actors, LAUNCH PAD is collaboration and experimentation in action.

SUMMER READING SERIES: NEW PLAYS IN PROCESS The LAUNCH PAD: New Plays in Process Reading Series invites three professional playwrights to join the UCSB community as artists in residence in a summer course. The collaboration between professional directors, a team of undergraduate students and the playwrights culminates in public readings. Through this process, students learn the vital skills of working on plays in the earliest of stages of their development. Playwrights include Jami Brandli, Deborah Brevoort, Joyce Carol Oates, Anne García Romero, KJ Sanchez and more!

LIFT OFF In 2015, a documentary entitled LIFT OFF: Behind the Scenes of LAUNCH PAD was created through a collaboration between the Departments of Theater and Dance &amp; Film and Media Studies. It went on to become an Official Selection of the 2016 Santa Barbara International Film Festival. Please contact us for screening information. It is the policy of the University of California, Santa Barbara and the UC Santa

In the no-man’s-land between workshops and professional premieres, a university production can be just what a new play needs. - Tom Jacobs, American Theatre Magazine

The Talented Ones premiered at the Artists Repertory Theatre in Portland, Oregon during their 2016/2017 season. Appoggiatura, commissioned by the Denver Center Theatre Company, was further developed at the Perry Mansfield New Works Festival and DCT’s Colorado New Play Summit. It received its professional premiere at the Denver Center Theatre Company in 2015 directed by Risa Brainin and starring UCSB alum Julian Remulla. See photograph above. Kingdom City received its world premiere at the La Jolla Playhouse in 2014. La Niñera: The Nursemaid received a reading at the Oregon Shakespeare Festival. Plumfield, Iraq has been produced at several colleges across the country. The Dinosaur Within received its professional premiere at the Boston Court Theatre. Melancholy Play has been produced at professional theaters and colleges across the country including Perseverance Theatre, Northwestern University, and Urban Stages.

PLEASE CONSIDER A GIFT TO “It was an intensely collaborative, lively experience. Truly what theatre should aim to be–a handful of people with wholly different life experiences all getting together to create an amazing story right now.” - Dakotah Brown, BFA graduate, actor in La Niñera: The Nursemaid

This program relies on the support of our friends and alumni. If you love exciting new works performed by talented, up-and-coming actors, we invite you to consider making a gift and joining the LAUNCH PAD family. For more information on making a gift, please visit theaterdance.ucsb.edu/launchpad/giving or contact Leslie Gray, Senior Director of Development, at (805) 893-4193 or Julie Weiner, Director of Development, at (805) 893-3922

A gift of any size can make a difference. Thank you for your support. Division of Humanities and Fine Arts Department of Theater and Dance University of California, Santa Barbara Santa Barbara, CA 93106-7060

WE WANT THE FUNK a LAUNCH PAD preview production

a rustbelt lullaby on the one!

a new play by Idris Goodwin directed by Risa Brainin 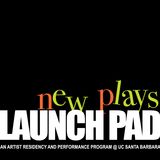