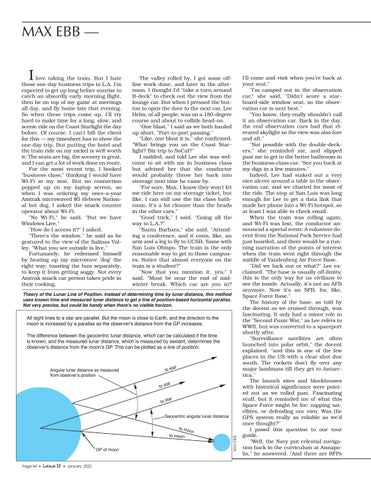 love taking the train. But I hate those one-day business trips to L.A. I&#39;m expected to get up long before sunrise to catch an absurdly early morning flight, then be on top of my game at meetings all day, and fly home late that evening. So when these trips come up, I&#39;ll try hard to make time for a long, slow, and scenic ride on the Coast Starlight the day before. Of course, I can&#39;t bill the client for this — my timesheet has to show the one-day trip. But putting the hotel and the train ride on my nickel is well worth it: The seats are big, the scenery is great, and I can get a lot of work done en route. For the most recent trip, I booked &quot;business class,&quot; thinking I would have Wi-Fi at my seat. But no connection popped up on my laptop screen, so when I was ordering my once-a-year Amtrak microwaved $5 Hebrew National hot dog, I asked the snack counter operator about Wi-Fi. &quot;No Wi-Fi,&quot; he said. &quot;But we have Windows Live.&quot; &quot;How do I access it?&quot; I asked. &quot;There&#39;s the window,&quot; he said as he gestured to the view of the Salinas Valley. &quot;What you see outside is live.&quot; Fortunately, he redeemed himself by heating up my microwave &#39;dog&#39; the right way: toasting the bun separately, to keep it from getting soggy. Not every Amtrak snack car person takes pride in their cooking.

The valley rolled by, I got some offline work done, and later in the afternoon, I thought I&#39;d &quot;take a turn around B-deck&quot; to check out the view from the lounge car. But when I pressed the button to open the door to the next car, Lee Helm, of all people, was on a 180-degree course and about to collide head-on. &quot;One blast,&quot; I said as we both hauled up short. &quot;Port-to-port passing.&quot; &quot;Like, one blast it is,&quot; she confirmed. &quot;What brings you on the Coast Starlight? Biz trip to SoCal?&quot; I nodded, and told Lee she was welcome to sit with me in business class but advised her that the conductor would probably throw her back into steerage next time he came by. &quot;For sure, Max. I know they won&#39;t let me ride here on my steerage ticket, but like, I can still use the biz class bathroom. It&#39;s a lot cleaner than the heads in the other cars.&quot; &quot;Good trick,&quot; I said. &quot;Going all the way to L.A.?&quot; &quot;Santa Barbara,&quot; she said. &quot;Attending a conference, and it costs, like, an arm and a leg to fly to UCSB. Same with San Luis Obispo. The train is the only reasonable way to get to those campuses. Notice that almost everyone on the train is a student?&quot; &quot;Now that you mention it, yes,&quot; I said. &quot;Must be near the end of midwinter break. Which car are you in?

Theory of the Lunar Line of Position. Instead of determining time by lunar distance, this method uses known time and measured lunar distance to get a line of position-based horizontal parallax. Not very precise, but could be handy when there&#39;s no visible horizon.

All sight lines to a star are parallel. But the moon is close to Earth, and the direction to the moon is increased by a parallax as the observer&#39;s distance from the GP increases. The difference between the geocentric lunar distance, which can be calculated if the time is known, and the measured lunar distance, which is measured by sextant, determines the observer&#39;s distance from the moon&#39;s GP. This can be plotted as a line of position.

to mo on to moon GP of moon

I&#39;ll come and visit when you&#39;re back at your seat.&quot; &quot;I&#39;m camped out in the observation car,&quot; she said. &quot;Didn&#39;t score a starboard-side window seat, so the observation car is next best.&quot; &quot;You know, they really shouldn&#39;t call it an observation car. Back in the day, the real observation cars had that elevated skylight so the view was also fore and aft.&quot; &quot;Not possible with the double-deckers,&quot; she reminded me, and slipped past me to get to the better bathroom in the business-class car. &quot;See you back at my digs in a few minutes.&quot; Indeed, Lee had staked out a very nice alcove around a table in the observation car, and we chatted for most of the ride. The stop at San Luis was long enough for Lee to get a data link that made her phone into a Wi-Fi hotspot, so at least I was able to check email. When the train was rolling again, and Wi-Fi was lost, the conductor announced a special event: A volunteer docent from the National Park Service had just boarded, and there would be a running narration of the points of interest when the train went right through the middle of Vandenberg Air Force Base. &quot;Did we luck out or what?&quot; Lee exclaimed. &quot;The base is usually off-limits; this is the only way for us civilians to see the inside. Actually, it&#39;s not an AFB anymore. Now it&#39;s an SFB, for, like, Space Force Base.&quot; The history of the base, as told by the docent as we cruised through, was fascinating. It only had a minor role in the &quot;Second Punic War,&quot; as Lee refers to WWII, but was converted to a spaceport shortly after. &quot;Surveillance satellites are often launched into polar orbit,&quot; the docent explained, &quot;and this is one of the few places in the US with a clear shot due south. The rockets don&#39;t fly over any major landmass till they get to Antarctica.&quot; The launch sites and blockhouses with historical significance were pointed out as we rolled past. Fascinating stuff, but it reminded me of what this Space Force might be for: zapping satellites, or defending our own. Was the GPS system really as reliable as we&#39;d once thought?&quot; I posed this question to our tour guide. &quot;Well, the Navy put celestial navigation back in the curriculum at Annapolis,&quot; he answered. &quot;And there are RFPs