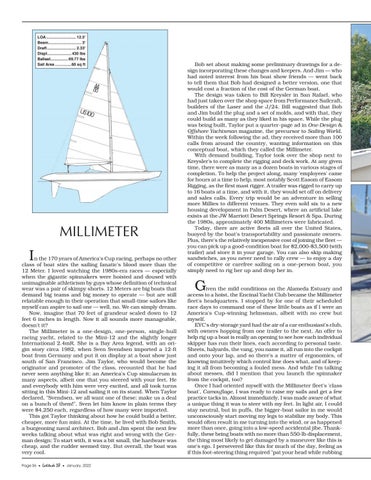 n the 170 years of America&#39;s Cup racing, perhaps no other class of boat stirs the sailing fanatic&#39;s blood more than the 12 Meter. I loved watching the 1980s-era races — especially when the gigantic spinnakers were hoisted and doused with unimaginable athleticism by guys whose definition of technical wear was a pair of skimpy shorts. 12 Meters are big boats that demand big teams and big money to operate — but are still relatable enough in their operation that small-time sailors like myself can aspire to sail one — well, no. We can simply dream. Now, imagine that 70 feet of grandeur scaled down to 12 feet 6 inches in length. Now it all sounds more manageable, doesn&#39;t it? The Millimeter is a one-design, one-person, single-hull racing yacht, related to the Mini-12 and the slightly longer International 2.4mR. She is a Bay Area legend, with an origin story circa 1982, when Sven Svendsen imported a 12-ft boat from Germany and put it on display at a boat show just south of San Francisco. Jim Taylor, who would become the originator and promoter of the class, recounted that he had never seen anything like it: an America&#39;s Cup simulacrum in many aspects, albeit one that you steered with your feet. He and everybody with him were very excited, and all took turns sitting in this Mini-12 and sailing it on its stand. When Taylor declared, &quot;Svendsen, we all want one of these; make us a deal on a bunch of them!&quot;, Sven let him know in plain terms they were $4,250 each, regardless of how many were imported. This got Taylor thinking about how he could build a better, cheaper, more fun mini. At the time, he lived with Bob Smith, a burgeoning naval architect. Bob and Jim spent the next few weeks talking about what was right and wrong with the German design: To start with, it was a bit small, the hardware was cheap, and the rudder seemed tiny. But overall, the boat was very cool. 0AGE s Latitude

Bob set about making some preliminary drawings for a design incorporating these changes and keepers. And Jim — who had noted interest from his boat show friends — went back to tell them that Bob had designed a better version, one that would cost a fraction of the cost of the German boat. The design was taken to Bill Kreysler in San Rafael, who had just taken over the shop space from Performance Sailcraft, builders of the Laser and the J/24. Bill suggested that Bob and Jim build the plug and a set of molds, and with that, they could build as many as they liked in his space. While the plug was being built, Taylor put a quarter-page ad in One-Design &amp; Offshore Yachtsman magazine, the precursor to Sailing World. Within the week following the ad, they received more than 100 calls from around the country, wanting information on this conceptual boat, which they called the Millimeter. With demand building, Taylor took over the shop next to Kreysler&#39;s to complete the rigging and deck work. At any given time, there were as many as a dozen boats in various stages of completion. To help the project along, many &#39;employees&#39; came for hours at a time to help, most notably Scott Easom of Easom Rigging, as the first mast rigger. A trailer was rigged to carry up to 16 boats at a time, and with it, they would set off on delivery and sales calls. Every trip would be an adventure in selling more Millies to different venues. They even sold six to a new housing development in Palm Desert, where an artificial lake exists at the JW Marriott Desert Springs Resort &amp; Spa. During the 1980s, approximately 400 Millimeters were fabricated. Today, there are active fleets all over the United States, buoyed by the boat&#39;s transportability and passionate owners. Plus, there&#39;s the relatively inexpensive cost of joining the fleet — you can pick up a good-condition boat for $2,000-$3,500 (with trailer) and store it in your garage. You can also skip making sandwiches, as you never need to rally crew — to enjoy a day of competitive or carefree sailing on a one-person boat, you simply need to rig her up and drop her in.

iven the mild conditions on the Alameda Estuary and access to a hoist, the Encinal Yacht Club became the Millimeter fleet&#39;s headquarters. I stopped by for one of their scheduled race days to command one of these little boats as if I were an America&#39;s Cup-winning helmsman, albeit with no crew but myself. EYC&#39;s dry-storage yard had the air of a car enthusiast&#39;s club, with owners hopping from one trailer to the next. An offer to help rig up a boat is really an opening to see how each individual skipper has run their lines, each according to personal taste. Sheets, halyards, the vang, you name it, all run into the cockpit and onto your lap, and so there&#39;s a matter of ergonomics, of knowing intuitively which control line does what, and of keeping it all from becoming a fouled mess. And while I&#39;m talking about messes, did I mention that you launch the spinnaker from the cockpit, too? Once I had oriented myself with the Millimeter fleet&#39;s &#39;class boat&#39;, Camouflage, I was ready to raise my sails and get a few practice tacks in. Almost immediately, I was made aware of what a unique thing it was to steer with my feet. In light air, I could stay neutral, but in puffs, the bigger-boat sailor in me would unconsciously start moving my legs to stabilize my body. This would often result in me turning into the wind, or as happened more than once, going into a low-speed accidental jibe. Thankfully, these being boats with no more than 550-lb displacement, the thing most likely to get damaged by a maneuver like this is one&#39;s ego. I persevered like this for much of the day, feeling as if this foot-steering thing required &quot;pat your head while rubbing