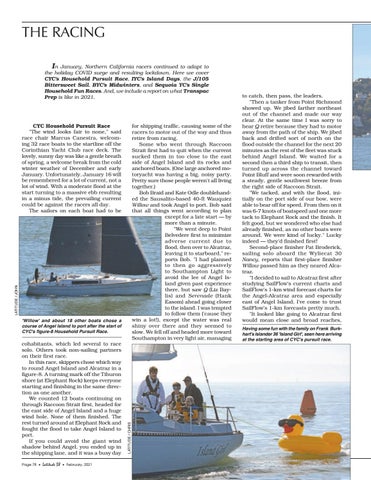 THE RACING I n January, Northern California racers continued to adapt to the holiday COVID surge and resulting lockdown. Here we cover CYC&#39;s Household Pursuit Race, IYC&#39;s Island Days, the J/105 Bittersweet Sail, BYC&#39;s Midwinters, and Sequoia YC&#39;s Single Household Fun Races. And, we include a report on what Transpac Prep is like in 2021.

&#39;Willow&#39; and about 18 other boats chose a course of Angel Island to port after the start of CYC&#39;s figure-8 Household Pursuit ace.

cohabitants, which led several to race solo. Others took non-sailing partners on their first race. In this race, skippers chose which way to round Angel Island and Alcatraz in a figure-8. A turning mark off the Tiburon shore (at Elephant Rock) keeps everyone starting and finishing in the same direction as one another. We counted 12 boats continuing on through Raccoon Strait first, headed for the east side of Angel Island and a huge wind hole. None of them finished. The rest turned around at Elephant Rock and fought the flood to take Angel Island to port. If you could avoid the giant wind shadow behind Angel, you ended up in the shipping lane, and it was a busy day Page

for shipping traffic, causing some of the racers to motor out of the way and thus retire from racing. Some who went through Raccoon Strait first had to quit when the current sucked them in too close to the east side of Angel Island and its rocks and anchored boats. (One large anchored motoryacht was having a big, noisy party. Pretty sure those people weren&#39;t all living together.) Bob Braid and Kate Odle doublehanded the Sausalito-based 40-ft Wauquiez Willow and took Angel to port. Bob said that all things went according to plan except for a late start — by more than a minute. &quot;We went deep to Point Belvedere first to minimize adverse current due to flood, then over to Alcatraz, leaving it to starboard,&quot; reports Bob. &quot;I had planned to then go aggressively to Southampton Light to avoid the lee of Angel Island given past experience there, but saw Q (Liz Baylis) and Serenade (Hank Easom) ahead going closer to the island. I was tempted to follow them (&#39;cause they win a lot!), except the water was real shiny over there and they seemed to slow. We fell off and headed more toward Southampton in very light air, managing

CYC Household Pursuit Race &quot;The wind looks fair to none,&quot; said race chair Marcus Canestra, welcoming 32 race boats to the startline off the Corinthian Yacht Club race deck. The lovely, sunny day was like a gentle breath of spring, a welcome break from the cold winter weather of December and early January. Unfortunately, January 16 will be remembered for a lot of current, not a lot of wind. With a moderate flood at the start turning to a massive ebb resulting in a minus tide, the prevailing current could be against the racers all day. The sailors on each boat had to be

to catch, then pass, the leaders. &quot;Then a tanker from Point Richmond showed up. We jibed farther northeast out of the channel and made our way clear. At the same time I was sorry to hear Q retire because they had to motor away from the path of the ship. We jibed back and drifted sort of north on the flood outside the channel for the next 20 minutes as the rest of the fleet was stuck behind Angel Island. We waited for a second then a third ship to transit, then turned up across the channel toward Point Bluff and were soon rewarded with a steady, gentle southwest breeze from the right side of Raccoon Strait. &quot;We tacked, and with the flood, initially on the port side of our bow, were able to bear off for speed. From then on it was 6-7 knots of boatspeed and one more tack to Elephant Rock and the finish. It felt good, but we wondered who else had already finished, as no other boats were around. We were kind of lucky.&quot; Lucky indeed — they&#39;d finished first! Second-place finisher Pat Broderick, sailing solo aboard the Wyliecat 30 Nancy, reports that first-place finisher Willow passed him as they neared Alcatraz. &quot;I decided to sail to Alcatraz first after studying SailFlow&#39;s current charts and SailFlow&#39;s 1-km wind forecast charts for the Angel-Alcatraz area and especially east of Angel Island. I&#39;ve come to trust SailFlow&#39;s 1-km forecasts pretty much. &quot;It looked like going to Alcatraz first would mean close and broad reaches, Having some fun with the family on Frank Burkhart&#39;s Islander 36 &#39;Island Girl&#39;, seen here arriving at the starting area of CYC&#39;s pursuit race.

Latitude 38 is the West's most popular sailing and marine magazine, published in print monthly.