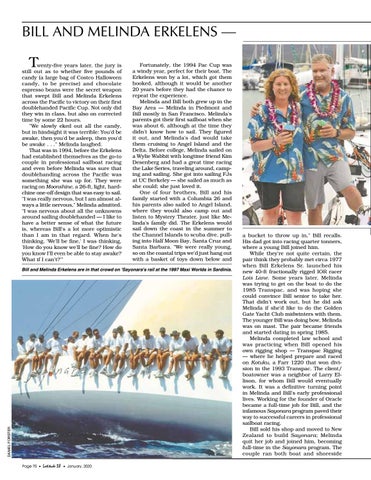 wenty-five years later, the jury is still out as to whether five pounds of candy (a large bag of Costco Halloween candy, to be precise) and chocolate espresso beans were the secret weapon that swept Bill and Melinda Erkelens across the Pacific to victory on their first doublehanded Pacific Cup. Not only did they win in class, but also on corrected time by some 22 hours. "We slowly eked out all the candy, but in hindsight it was terrible: You'd be awake, then you'd be asleep, then you'd be awake . . ." Melinda laughed. That was in 1994, before the Erkelens had established themselves as the go-to couple in professional sailboat racing and even before Melinda was sure that doublehanding across the Pacific was something she was up for. They were racing on Moonshine, a 26-ft, light, hardchine one-off design that was easy to sail. "I was really nervous, but I am almost always a little nervous," Melinda admitted. "I was nervous about all the unknowns around sailing doublehanded — I like to have a better sense of what the future is, whereas Bill's a lot more optimistic than I am in that regard. When he's thinking, 'We'll be fine,' I was thinking, 'How do you know we'll be fine? How do you know I'll even be able to stay awake? What if I can't?'"

Fortunately, the 1994 Pac Cup was a windy year, perfect for their boat. The Erkelens won by a lot, which got them hooked, although it would be another 20 years before they had the chance to repeat the experience. Melinda and Bill both grew up in the Bay Area — Melinda in Piedmont and Bill mostly in San Francisco. Melinda's parents got their first sailboat when she was about 6, although at the time they didn't know how to sail. They figured it out, and Melinda's dad would take them cruising to Angel Island and the Delta. Before college, Melinda sailed on a Wylie Wabbit with longtime friend Kim Desenberg and had a great time racing the Lake Series, traveling around, camping and sailing. She got into sailing FJs at UC Berkeley — she sailed as much as she could; she just loved it. One of four brothers, Bill and his family started with a Columbia 26 and his parents also sailed to Angel Island, where they would also camp out and listen to Mystery Theater, just like Melinda's family did. The Erkelens would sail down the coast in the summer to the Channel Islands to scuba dive, pulling into Half Moon Bay, Santa Cruz and Santa Barbara. "We were really young, so on the coastal trips we'd just hang out with a basket of toys down below and

Bill and Melinda Erkelens are in that crowd on 'Sayonara's rail at the 1997 Maxi Worlds in Sardinia.

a bucket to throw up in," Bill recalls. His dad got into racing quarter tonners, where a young Bill joined him. While they're not quite certain, the pair think they probably met circa 1977 when Bill Erkelens Sr. launched his new 40-ft fractionally rigged IOR racer Lois Lane. Some years later, Melinda was trying to get on the boat to do the 1985 Transpac, and was hoping she could convince Bill senior to take her. That didn't work out, but he did ask Melinda if she'd like to do the Golden Gate Yacht Club midwinters with them. The younger Bill was doing bow, Melinda was on mast. The pair became friends and started dating in spring 1985. Melinda completed law school and was practicing when Bill opened his own rigging shop — Transpac Rigging — where he helped prepare and raced on Kotuku, a Farr 1220 that won division in the 1993 Transpac. The client/ boatowner was a neighbor of Larry Ellison, for whom Bill would eventually work. It was a definitive turning point in Melinda and Bill's early professional lives. Working for the founder of Oracle became a full-time job for Bill, and the infamous Sayonara program paved their way to successful careers in professional sailboat racing. Bill sold his shop and moved to New Zealand to build Sayonara; Melinda quit her job and joined him, becoming full-time in the Sayonara program. The couple ran both boat and shoreside