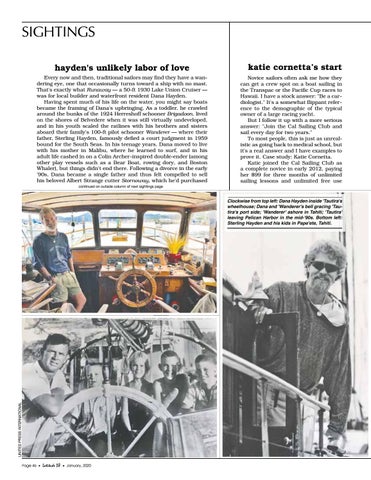 SIGHTINGS hayden&#39;s unlikely labor of love Every now and then, traditional sailors may find they have a wandering eye, one that occasionally turns toward a ship with no mast. That&#39;s exactly what Runaway — a 50-ft 1930 Lake Union Cruiser — was for local builder and waterfront resident Dana Hayden. Having spent much of his life on the water, you might say boats became the framing of Dana&#39;s upbringing. As a toddler, he crawled around the bunks of the 1924 Herreshoff schooner Brigadoon, lived on the shores of Belvedere when it was still virtually undeveloped, and in his youth scaled the ratlines with his brothers and sisters aboard their family&#39;s 100-ft pilot schooner Wanderer — where their father, Sterling Hayden, famously defied a court judgment in 1959 bound for the South Seas. In his teenage years, Dana moved to live with his mother in Malibu, where he learned to surf, and in his adult life cashed in on a Colin Archer-inspired double-ender (among other play vessels such as a Bear Boat, rowing dory, and Boston Whaler), but things didn&#39;t end there. Following a divorce in the early &#39;90s, Dana became a single father and thus felt compelled to sell his beloved Albert Strange cutter Stornoway, which he&#39;d purchased

katie cornetta’s start Novice sailors often ask me how they can get a crew spot on a boat sailing in the Transpac or the Pacific Cup races to Hawaii. I have a stock answer: &quot;Be a cardiologist.&quot; It&#39;s a somewhat flippant reference to the demographic of the typical owner of a large racing yacht. But I follow it up with a more serious answer: &quot;Join the Cal Sailing Club and sail every day for two years.&quot; To most people, this is just as unrealistic as going back to medical school, but it&#39;s a real answer and I have examples to prove it. Case study: Katie Cornetta. Katie joined the Cal Sailing Club as a complete novice in early 2012, paying her $99 for three months of unlimited sailing lessons and unlimited free use

continued on outside column of next sightings page