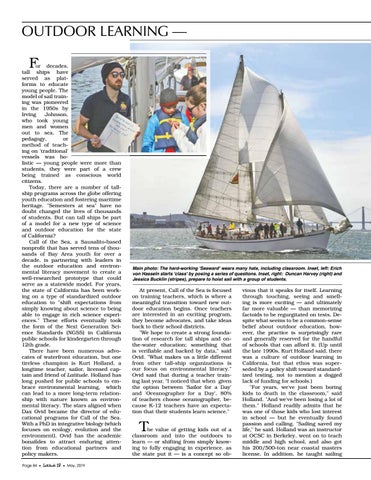 or decades, tall ships have served as platforms to educate young people. The model of sail training was pioneered in the 1950s by Irving Johnson, who took young men and women out to sea. The pedagogy, or method of teaching on 'traditional' vessels was holistic — young people were more than students, they were part of a crew being trained as conscious world citizens. Today, there are a number of tallship programs across the globe offering youth education and fostering maritime heritage. "Semesters at sea" have no doubt changed the lives of thousands of students. But can tall ships be part of a model for a new type of science and outdoor education for the state of California? Call of the Sea, a Sausalito-based nonprofit that has served tens of thousands of Bay Area youth for over a decade, is partnering with leaders in the outdoor education and environmental literacy movement to create a well-researched prototype that could serve as a statewide model. For years, the state of California has been working on a type of standardized outdoor education to "shift expectations from simply knowing about science to being able to engage in rich science experiences." These efforts eventually took the form of the Next Generation Science Standards (NGSS) in California public schools for kindergarten through 12th grade. There have been numerous advocates of waterfront education, but one tireless champion is Kurt Holland, a longtime teacher, sailor, licensed captain and friend of Latitude. Holland has long pushed for public schools to embrace environmental learning, which can lead to a more long-term relationship with nature known as environmental literacy. The stars aligned when Dax Ovid became the director of educational programs for Call of the Sea. With a PhD in integrative biology (which focuses on ecology, evolution and the environment), Ovid has the academic bonafides to attract enduring attention from educational partners and policy makers. Page 84 •

At present, Call of the Sea is focused on training teachers, which is where a meaningful transition toward new outdoor education begins. Once teachers are interested in an exciting program, they become advocates, and take ideas back to their school districts. "We hope to create a strong foundation of research for tall ships and onthe-water education; something that is verifiable and backed by data," said Ovid. "What makes us a little different from other tall-ship organizations is our focus on environmental literacy." Ovid said that during a teacher training last year, "I noticed that when given the option between 'Sailor for a Day' and 'Oceanographer for a Day', 80% of teachers choose oceanographer, because K-12 teachers have an expectation that their students learn science."

he value of getting kids out of a classroom and into the outdoors to learn — or shifting from simply knowing to fully engaging in experience, as the state put it — is a concept so ob-

vious that it speaks for itself. Learning through touching, seeing and smelling is more exciting — and ultimately far more valuable — than memorizing factoids to be regurgitated on tests. Despite what seems to be a common-sense belief about outdoor education, however, the practice is surprisingly rare and generally reserved for the handful of schools that can afford it. (Up until the late 1990s, Kurt Holland said, there was a culture of outdoor learning in California, but that ethos was superseded by a policy shift toward standardized testing, not to mention a dogged lack of funding for schools.) "For years, we've just been boring kids to death in the classroom," said Holland. "And we've been losing a lot of them." Holland readily admits that he was one of those kids who lost interest in school — but he eventually found passion and calling. "Sailing saved my life," he said. Holland was an instructor at OCSC in Berkeley, went on to teach middle and high school, and also got his 200/500-ton near coastal masters license. In addition, he taught sailing

The May 2019 issue of the West's premier sailing and marine magazine.

The May 2019 issue of the West's premier sailing and marine magazine.