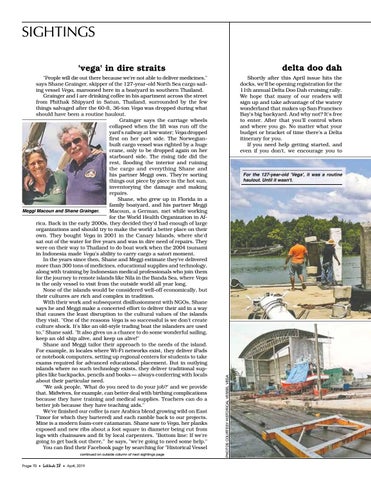 continued on outside column of next sightings page Page 70 •

Shortly after this April issue hits the docks, we'll be opening registration for the 11th annual Delta Doo Dah cruising rally. We hope that many of our readers will sign up and take advantage of the watery wonderland that makes up San Francisco Bay's big backyard. And why not? It's free to enter. After that you'll control when and where you go. No matter what your budget or bracket of time there's a Delta itinerary for you. If you need help getting started, and even if you don't, we encourage you to

"People will die out there because we're not able to deliver medicines," says Shane Grainger, skipper of the 127-year-old North Sea cargo sailing vessel Vega, marooned here in a boatyard in southern Thailand. Grainger and I are drinking coffee in his apartment across the street from Phithak Shipyard in Satun, Thailand, surrounded by the few things salvaged after the 60-ft, 36-ton Vega was dropped during what should have been a routine haulout. Grainger says the carriage wheels collapsed when the lift was run off the yard's railway at low water; Vega dropped first on her port side. The Norwegianbuilt cargo vessel was righted by a huge crane, only to be dropped again on her starboard side. The rising tide did the rest, flooding the interior and ruining the cargo and everything Shane and his partner Meggi own. They're sorting things out piece by piece in the hot sun, inventorying the damage and making repairs. Shane, who grew up in Florida in a family boatyard, and his partner Meggi Meggi Macoun and Shane Grainger. Macoun, a German, met while working for the World Health Organization in Africa. Back in the early 2000s, they decided they'd had enough of large organizations and should try to make the world a better place on their own. They bought Vega in 2001 in the Canary Islands, where she'd sat out of the water for five years and was in dire need of repairs. They were on their way to Thailand to do boat work when the 2004 tsunami in Indonesia made Vega's ability to carry cargo a satori moment. In the years since then, Shane and Meggi estimate they've delivered more than 300 tons of medicines, educational supplies and technology, along with training by Indonesian medical professionals who join them for the journey to remote islands like Nila in the Banda Sea, where Vega is the only vessel to visit from the outside world all year long. None of the islands would be considered well-off economically, but their cultures are rich and complex in tradition. With their work and subsequent disillusionment with NGOs, Shane says he and Meggi make a concerted effort to deliver their aid in a way that causes the least disruption to the cultural values of the islands they visit. "One of the reasons Vega is so successful is we don't create culture shock. It's like an old-style trading boat the islanders are used to," Shane said. "It also gives us a chance to do some wonderful sailing, keep an old ship alive, and keep us alive!" Shane and Meggi tailor their approach to the needs of the island. For example, in locales where Wi-Fi networks exist, they deliver iPads or notebook computers, setting up regional centers for students to take exams required for advanced educational placement. But in outlying islands where no such technology exists, they deliver traditional supplies like backpacks, pencils and books — always conferring with locals about their particular need. "We ask people, 'What do you need to do your job?' and we provide that. Midwives, for example, can better deal with birthing complications because they have training and medical supplies. Teachers can do a better job because they have teaching aids." We've finished our coffee (a rare Arabica blend growing wild on East Timor for which they bartered) and each ramble back to our projects. Mine is a modern foam-core catamaran. Shane saw to Vega, her planks exposed and new ribs about a foot square in diameter being cut from logs with chainsaws and fit by local carpenters. "Bottom line: If we're going to get back out there," he says, "we're going to need some help." You can find their Facebook page by searching for "Historical Vessel

The April 2019 issue of the West's premier sailing and marine magazine.

The April 2019 issue of the West's premier sailing and marine magazine.