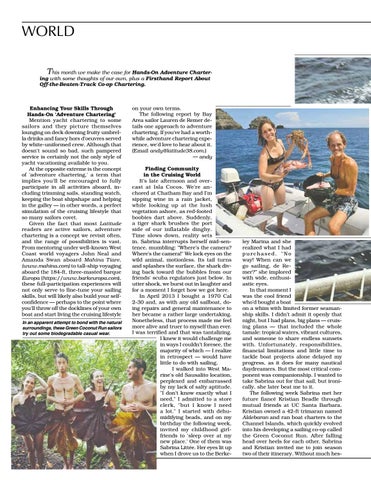 his month we make the case for Hands-On Adventure Chartering with some thoughts of our own, plus a Firsthand Report About Off-the-Beaten-Track Co-op Chartering.

Enhancing Your Skills Through Hands-On &#39;Adventure Chartering&#39; Mention yacht chartering to some sailors and they picture themselves lounging on deck downing fruity umbrella drinks and fancy hors d&#39;oeuvres served by white-uniformed crew. Although that doesn&#39;t sound so bad, such pampered service is certainly not the only style of yacht vacationing available to you. At the opposite extreme is the concept of &#39;adventure chartering,&#39; a term that implies you&#39;ll be encouraged to fully participate in all activities aboard, including trimming sails, standing watch, keeping the boat shipshape and helping in the galley — in other words, a perfect simulation of the cruising lifestyle that so many sailors covet. Given the fact that most Latitude readers are active sailors, adventure chartering is a concept we revisit often, and the range of possibilities is vast. From mentoring under well-known West Coast world voyagers John Neal and Amanda Swan aboard Mahina Tiare, (www.mahina.com) to tall-ship voyaging aboard the 184-ft, three-masted barque Europa (https://www.barkeuropa.com), https://www.barkeuropa.com these full-participation experiences will not only serve to fine-tune your sailing skills, but will likely also build your selfconfidence — perhaps to the point where you&#39;ll throw off the docklines of your own boat and start living the cruising lifestyle

In an apparent attempt to bond with the natural surroundings, these Green Coconut Run sailors try out some biodegradable casual wear.

on your own terms. The following report by Bay Area sailor Lauren de Remer details one approach to adventure chartering. If you&#39;ve had a worthwhile adventure chartering experience, we&#39;d love to hear about it. (Email andy@latitude38.com.) — andy Finding Community in the Cruising World It’s late afternoon and overcast at Isla Cocos. We’re anchored at Chatham Bay and I’m sipping wine in a rain jacket, while looking up at the lush vegetation ashore, as red-footed boobies dart above. Suddenly, a tiger shark brushes the port side of our inflatable dinghy. Time slows down, reality sets in. Sabrina interrupts herself mid-sentence, mumbling: &quot;Where’s the camera? Where’s the camera!&quot; We lock eyes on the wild animal, motionless. Its tail turns and splashes the surface, the shark diving back toward the bubbles from our friends&#39; scuba regulators just below. In utter shock, we burst out in laughter and for a moment I forget how we got here. In April 2013 I bought a 1970 Cal 2-30 and, as with any old sailboat, doing repairs and general maintenance to her became a rather large undertaking. Nonetheless, that process made me feel more alive and truer to myself than ever. I was terrified and that was tantalizing. I knew it would challenge me in ways I couldn’t foresee, the majority of which — I realize in retrospect — would have little to do with sailing. I walked into West Marine&#39;s old Sausalito location, perplexed and embarrassed by my lack of salty aptitude. &quot;I don’t know exactly what I need,&quot; I admitted to a store clerk, &quot;but I know I need a lot.&quot; I started with dehumidifying beads, and on my birthday the following week, invited my childhood girlfriends to &#39;sleep over at my new place.&#39; One of them was Sabrina Littée. Her eyes lit up when I drove us to the Berke-

ley Marina and she realized what I had purchased. &quot;No way! When can we go sailing, de Remer?” she implored with wide, enthusiastic eyes. In that moment I was the cool friend who&#39;d bought a boat on a whim with limited former seamanship skills. I didn’t admit it openly that night, but I had plans, big plans — cruising plans — that included the whole tamale: tropical waters, vibrant cultures, and someone to share endless sunsets with. Unfortunately, responsibilities, financial limitations and little time to tackle boat projects alone delayed my progress, as it does for many nautical daydreamers. But the most critical component was companionship. I wanted to take Sabrina out for that sail, but ironically, she later beat me to it. The following week Sabrina met her future fiancé Kristian Beadle through mutual friends at UC Santa Barbara. Kristian owned a 42-ft trimaran named Aldebaran and ran boat charters to the Channel Islands, which quickly evolved into his developing a sailing co-op called the Green Coconut Run. After falling head over heels for each other, Sabrina and Kristian invited me to join season two of their itinerary. Without much hes-

The July 2017 issue of the West's premier sailing and marine magazine.