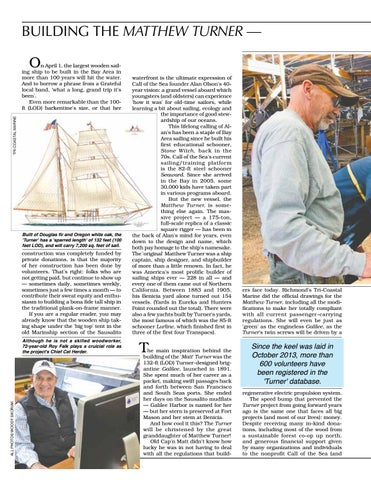 n April 1, the largest wooden sailing ship to be built in the Bay Area in more than 100 years will hit the water. And to borrow a phrase from a Grateful local band, &#39;what a long, grand trip it&#39;s been&#39;. Even more remarkable than the 100ft (LOD) barkentine&#39;s size, or that her

construction was completely funded by private donations, is that the majority of her construction has been done by volunteers. That&#39;s right: folks who are not getting paid, but continue to show up — sometimes daily, sometimes weekly, sometimes just a few times a month — to contribute their sweat equity and enthusiasm to building a bona fide tall ship in the traditional plank-on-frame manner. If you are a regular reader, you may already know that the wooden ship taking shape under the &#39;big top&#39; tent in the old Marinship section of the Sausalito

Although he is not a skilled woodworker, 72-year-old Roy Falk plays a cruicial role as the project&#39;s Chief Cat Herder.

waterfront is the ultimate expression of Call of the Sea founder Alan Olson&#39;s 40year vision: a grand vessel aboard which youngsters (and oldsters) can experience &#39;how it was&#39; for old-time sailors, while learning a bit about sailing, ecology and the importance of good stewardship of our oceans. This lifelong calling of Alan&#39;s has been a staple of Bay Area sailing since he built his first educational schooner, Stone Witch, back in the 70s. Call of the Sea&#39;s current sailing/training platform is the 82-ft steel schooner Seaward. Since she arrived in the Bay in 2005, some 30,000 kids have taken part in various programs aboard. But the new vessel, the Matthew Turner, is something else again. The massive project — a 175-ton, full-scale replica of a classic square rigger — has been in the back of Alan&#39;s mind for years, even down to the design and name, which both pay homage to the ship&#39;s namesake. The &#39;original&#39; Matthew Turner was a ship captain, ship designer, and shipbuilder of more than a little renown. In fact, he was America&#39;s most prolific builder of sailing ships ever — 228 in all — and every one of them came out of Northern California. Between 1883 and 1905, his Benicia yard alone turned out 154 vessels. (Yards in Eureka and Hunters Point rounded out the total). There were also a few yachts built by Turner&#39;s yards, the most famous of which was the 85-ft schooner Lurline, which finished first in three of the first four Transpacs).

he main inspiration behind the building of the &#39;Matt&#39; Matt Turner was the Matt&#39; 132-ft (LOD) Turner-designed brigantine Galilee, launched in 1891. She spent much of her career as a packet, making swift passages back and forth between San Francisco and South Seas ports. She ended her days on the Sausalito mudflats — Galilee Harbor is named for her — but her stern is preserved at Fort Mason and her stem at Benicia. And how cool it this? The Turner will be christened by the great granddaughter of Matthew Turner! Old Cap&#39;n Matt didn&#39;t know how lucky he was in not having to deal with all the regulations that build-

ers face today. Richmond&#39;s Tri-Coastal Marine did the official drawings for the Matthew Turner, including all the modifications to make her totally compliant with all current passenger -carrying regulations. She will even be just as &#39;green&#39; as the engineless Galilee, as the Turner&#39;s twin screws will be driven by a Turner

Since the keel was laid in October 2013, more than 600 volunteers have been registered in the &#39;Turner&#39; database. regenerative electric propulsion system. The speed bump that prevented the Turner project from going forward years ago is the same one that faces all big projects (and most of our lives): money. Despite receiving many in-kind donations, including most of the wood from a sustainable forest co-op up north, and generous financial support given by many organizations and individuals to the nonprofit Call of the Sea (and

The March 2017 issue of the West's premier sailing and marine magazine.