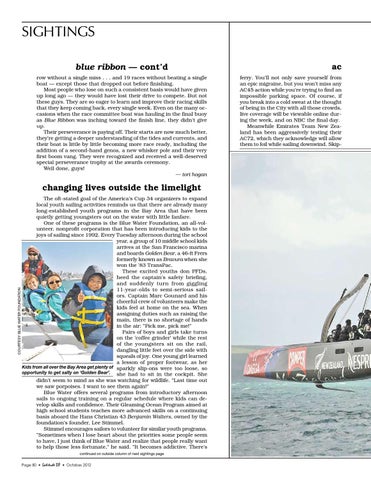 SIGHTINGS blue ribbon — cont’d row without a single miss . . . and 19 races without beating a single boat — except those that dropped out before finishing. Most people who lose on such a consistent basis would have given up long ago — they would have lost their drive to compete. But not these guys. They are so eager to learn and improve their racing skills that they keep coming back, every single week. Even on the many occasions when the race committee boat was hauling in the final buoy as Blue Ribbon was inching toward the finish line, they didn’t give up. Their perseverance is paying off. Their starts are now much better, they’re getting a deeper understanding of the tides and currents, and their boat is little by little becoming more race ready, including the addition of a second-hand genoa, a new whisker pole and their very first boom vang. They were recognized and received a well-deserved special perseverance trophy at the awards ceremony. Well done, guys! — tori hogan

changing lives outside the limelight The oft-stated goal of the America’s Cup 34 organizers to expand local youth sailing activities reminds us that there are already many long-established youth programs in the Bay Area that have been quietly getting youngsters out on the water with little fanfare. One of these programs is the Blue Water Foundation, an all-volunteer, nonprofit corporation that has been introducing kids to the joys of sailing since 1992. Every Tuesday afternoon during the school year, a group of 10 middle school kids arrives at the San Francisco marina and boards Golden Bear Bear, a 46-ft Frers formerly known as Bravura when she won the ‘83 TransPac. These excited youths don PFDs, heed the captain’s safety briefing, and suddenly turn from giggling 11-year-olds to semi-serious sailors. Captain Marc Gounard and his cheerful crew of volunteers make the kids feel at home on the sea. When assigning duties such as raising the main, there is no shortage of hands in the air: “Pick me, pick me!” Pairs of boys and girls take turns on the ‘coffee grinder’ while the rest of the youngsters sit on the rail, dangling little feet over the side with squeals of joy. One young girl learned a lesson of proper footwear, as her Kids from all over the Bay Area get plenty of sparkly slip-ons were too loose, so opportunity to get salty on ‘Golden Bear’. she had to sit in the cockpit. She didn’t seem to mind as she was watching for wildlife. “Last time out we saw porpoises. I want to see them again!” Blue Water offers several programs from introductory afternoon sails to ongoing training on a regular schedule where kids can develop skills and confidence. Their Gleaming Ocean Program aimed at high school students teaches more advanced skills on a continuing basis aboard the Hans Christian 43 Benjamin Walters, owned by the foundation’s founder, Lee Stimmel. Stimmel encourages sailors to volunteer for similar youth programs. “Sometimes when I lose heart about the priorities some people seem to have, I just think of Blue Water and realize that people really want to help those less fortunate,” he said. “It becomes addictive. There’s continued on outside column of next sightings page Page 80 •

ac ferry. You’ll not only save yourself from an epic migraine, but you won’t miss any AC45 action while you’re trying to find an impossible parking space. Of course, if you break into a cold sweat at the thought of being in the City with all those crowds, live coverage will be viewable online during the week, and on NBC the final day. Meanwhile Emirates Team New Zealand has been aggressively testing their AC72, which they acknowledge will allow them to foil while sailing downwind. Skip-

The October 2012 issue of the West's premier sailing and marine magazine.